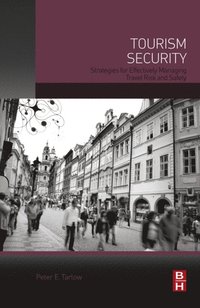 "...timely in its release and a good reference for the tourism security manager.the meat of the book is valuable and all-inclusive...The best tools in the book deal with risk and crisis management."--Security Management, Tourism Security

Dr. Peter E. Tarlow is a world-renowned speaker and expert specializing in the impact of crime and terrorism on the tourism industry, event and tourism risk management, and economic development. Since 1990, Tarlow has been teaching courses on tourism, crime, and terrorism to police forces and security and tourism professionals throughout the world. He is also a founder and president of Tourism & More Inc. (T&M).

Tarlow's fluency in many languages enables him to speak throughout the world. He lectures on a wide range of current and future trends in the tourism industry, rural tourism economic development, the gaming industry, issues of crime and terrorism, the role of police departments in urban economic development, and international trade. Tarlow trains numerous police departments throughout the world in TOPPS (Tourism Oriented Policing and Protection Services) and offers certification in this area. He has appeared on nationally televised programs such as Dateline (NBC) and on CNBC, and is a regular guest on radio stations around the United States. Tarlow also organizes conferences dealing with visitor safety and security issues and the economic importance of tourism and tourism marketing.

Tarlow's research ranges from the impact of school calendars on the tourism industries to tourism ecology and business. These research interests allow Tarlow to work with communities throughout the United States. He researches how communities can use their tourism as an economic development tool during difficult economic times, and at the same time improve their local residents' quality of life. He also functions as an expert witness in courts throughout the United States on matters concerning tourism security and safety, and issues of risk management.

Tarlow earned his Ph.D. in sociology from Texas A&M University. He also holds degrees in history, Spanish and Hebrew literatures, and psychotherapy. His other publications include Event Risk Management and Safety (Wiley, 2002) and Twenty Years of Tourism Tidbits (Universidad de Especialidades Tursticas, 2010). He has also recently published a book on Cruise Safety (written in Portuguese) entitled Abordagem Multdisciplinar dos Cruzeiros Tursticos. Tarlow also writes and speaks for major organizations such as the Organization of U.S. State Dams, and the International Association of Event Managers.