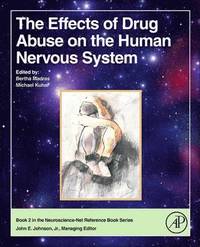 The Effects of Drug Abuse on the Human Nervous System

av Bertha Madras
Inbunden Engelska, 2014-01-20
1149
Köp
Spara som favorit
Skickas inom 7-10 vardagar.
Fri frakt inom Sverige för privatpersoner.
Finns även som
Visa alla 1 format & utgåvor
Drug use and abuse continues to thrive in contemporary society worldwide and the instance and damage caused by addiction increases along with availability. The Effects of Drug Abuse on the Human Nervous System presents objective, state-of-the-art information on the impact of drug abuse on the human nervous system, with each chapter offering a specific focus on nicotine, alcohol, marijuana, cocaine, methamphetamine, MDMA, sedative-hypnotics, and designer drugs. Other chapters provide a context for drug use, with overviews of use and consequences, epidemiology and risk factors, genetics of use and treatment success, and strategies to screen populations and provide appropriate interventions. The book offers meaningful, relevant and timely information for scientists, health-care professionals and treatment providers.

Bloggat om The Effects of Drug Abuse on the Human Ne...

Dr. Madras is Professor of Psychobiology at Harvard Medical School (HMS), is cross-appointed at the Massachusetts General Hospital and founded the Division of Neurochemistry at the HMS Primate Center. She served as Deputy Director for Demand Reduction in the White House Office of National Drug Control Policy (ONDCP), a Presidential appointment confirmed unanimously by the Senate. Her discoveries in addiction neurobiology and pharmacology informed her development of candidate medications and brain imaging probes, the latter widely used in clinical research of drug mechanisms, neurotoxicity, Parkinson's disease diagnosis, ADHD, other neuropsychiatric disorders. The Division also developed naturalistic primate genotype/phenotype models of psychiatric disorders. Her current research focuses on molecular adaptations which conceivably alter the trajectory of brain development in adolescent drug users. She has authored numerous scientific manuscripts, co-edited the "The Cell Biology of Addiction, and received 19 patents with collaborators. Her commitment to academic and public education is reflected in her mentorship of students, creation of courses on addiction biology (HMS, Cold Spring Harbor Laboratory) and a Boston Museum of Science exhibit and CD (licensed by Disney Corp. in 2006) on how drugs affect the brain. At ONDCP, her public health approach to Demand Reduction featured medicalization of Screening, Brief Intervention, Referral to Treatment (SBIRT) services. She spearheaded approval of SBIRT CPT Medicaid and Medicare billing codes, web-based screening/training, and a UN endorsement of SBIRT. Recognition includes NIH-NIDA MERIT, Public Service and Career Scientist awards, an American Academy of Addiction Psychiatry Founders' Award, Marian Fischman Award, and designation of the imaging agent altropane in "The Better World Report, 2006, as one of "25 technology transfer innovations that changed the world. She has delivered hundreds of presentations on addiction and related topics to various groups nationally and globally. Michael J Kuhar, PhD, is currently Candler Professor in the Emory University School of Medicine, a Georgia Research Alliance Eminent Scholar, and Professor at the Yerkes National Primate Research Center. His general areas of interest have been the structure and function of the brain, mental illness, and the drugs that affect the brain. Addiction has been his major focus for many years, and he is one of the most productive and highly cited scientists worldwide. He has trained a large cadre of students, fellows and visitors, received a number of prestigious awards for his work, and remains involved in many aspects of addiction research and education. In June, he received the Eddy lifetime achievement award from the College on Problems of Drug Dependence.