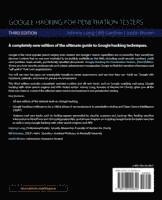 You will learn how Google Maps and Google Earth provide pinpoint military accuracy, see how bad guys can manipulate Google to create super worms, and see how they can "mash up" Google with Facebook, LinkedIn, and more for passive reconnaissance.

This third editionincludes completely updated content throughout and all new hacks such as Google scripting and using Google hacking with other search engines and APIs. Noted author Johnny Long, founder of Hackers for Charity, gives you all the tools you need to conduct the ultimate open source reconnaissance and penetration testing.

"This book should be a required read for system administrators and infosec pros in general, as it gives a sobering overview of what type of information that should not be publicly available can be found online - if you know how to look for it." --Help Net Security

Johnny Long is a Christian by grace, a professional hacker by trade, a pirate by blood, a ninja in training, a security researcher and author. He can be found lurking at his website (http://johnny.ihackstuff.com). He is the founder of Hackers For Charity(http://ihackcharities.org), an organization that provides hackers with job experience while leveraging their skills for charities that need those skills. Bill Gardner is an Assistant Professor at Marshall University, where he teaches information security and foundational technology courses in the Department of Integrated Science and Technology. He is also President and Principal Security Consultant at BlackRock Consulting. In addition, Bill is Vice President and Information Security Chair at the Appalachian Institute of Digital Evidence. AIDE is a non-profit organization that provides research and training for digital evidence professionals including attorneys, judges, law enforcement officers and information security practitioners in the private sector. Prior to joining the faculty at Marshall, Bill co-founded the Hack3rCon convention, and co-founded 304blogs, and he continues to serve as Vice President of 304Geeks. In addition, Bill is a founding member of the Security Awareness Training Framework, which will be a prime target audience for this book. Justin Brown (@spridel11) is an Information Assurance Analyst at a large financial institution. Previously, Justin worked for as a consultant specializing in Open Source Intelligence. Through Google Hacking and dorks Justin has uncovered numerous troves of information leaks regarding his clients. Justin can usually be found at conferences volunteering with Hackers for Charity.