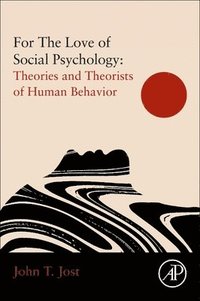 For The Love of Social Psychology: Essays on The Study of Human Nature

av John T Jost
Häftad Engelska, 2021-05-01
879
Bevaka
Spara som favorit
Ännu ej utkommen – klicka "Bevaka" för att få ett mejl så fort boken boken går att köpa.
For the Love of Social Psychology examines the most exciting and important contributions to the study of human nature in the 20th and early 21st centuries. Focusing on thought leaders in social psychology today, author John Jost scrutinizes the theorists and their work. This is particularly important as the discipline faces a period of intense self-criticism and conflict over statistical methods and practices. The ideas of social and personality psychology, which may well constitute its greatest asset to society and to interdisciplinary scholarship, are at risk of being lost or abandoned.For the Love of Social Psychologyis a critical component in understanding these various thinkers within the context of the discipline, and in providing an optimistic vision for students, theorists, and practitioners so they can fulfill their goals of bettering society through scientific means.

Bloggat om For The Love of Social Psychology: Essays...

John T. Jost is Professor of Psychology and Politics and Co-Director of the Center for Social and Political Behavior at New York University. His research, which addresses stereotyping, prejudice, political ideology, and system justification theory, has been funded by the National Science Foundation and has appeared in top scientific journals and received national and international media attention. He has published over 150 journal articles and book chapters and four co-edited book volumes, including Social and Psychological Bases of Ideology and System Justification (Oxford, 2009). He has received numerous honors and awards, including the Gordon Allport Intergroup Relations Prize, Erik Erikson Award for Early Career in Political Psychology, International Society for Self and Identity Early Career Award, Society for Personality and Social Psychology Theoretical Innovation Prize, Society of Experimental Social Psychology Career Trajectory Award, and the Morton Deutsch Award for Distinguished Scholarly and Practical Contributions to Social Justice. He has served on several editorial boards and executive committees of professional societies and is currently editor of the Oxford University Press book series on Political Psychology. He is a Fellow of the Society of Experimental Social Psychology and the Association of Psychological Science, and is past President of the International Society of Political Psychology.