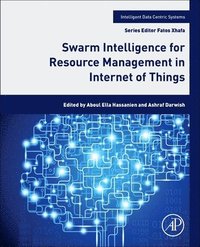 Swarm Intelligence for Resource Management in Internet of Things

Swarm Intelligence for Resource Management in the Internet of Things presents a new approach in Artificial Intelligence that can be used for resources management in IoT, which is considered a critical issue for this network. The authors demonstrate these resource management applications using swarm intelligence techniques. Currently, IoT can be used in many important applications which include healthcare, smart cities, smart homes, smart hospitals, environment monitoring, and video surveillance. IoT devices cannot perform complex on-site data processing due to their limited battery and processing. However, the major processing unit of an application can be transmitted to other nodes, which are more powerful in terms of storage and processing. By applying swarm intelligence algorithms for IoT devices, we can provide major advantages for energy saving in IoT devices. Swarm Intelligence for Resource Management in the Internet of Things shows the reader how to overcome the problems and challenges of creating and implementing swarm intelligence algorithms for each application

Dr Aboul Ella Hassanein is the Founder and Head of the Egyptian Scientific Research Group (SRGE), Cairo Univesrity, and a Professor of Information Technology at the Faculty of Computer and Information, Cairo University. Professor Hassanien is ex-dean of the faculty of computers and information, Beni Suef University. Professor Hassanien has more than 800 scientific research papers published in prestigious international journals and over 40 books covering such diverse topics as data mining, medical images, intelligent systems, social networks and smart environment. Dr. Darwish has been invited as reviewer, invited speaker, organizer, and session chair to many international conferences and journals. He has worked in a wide variety of academic organizations and supervises masters and PhD theses in different areas of computer science. He speaks four languages on a daily basis. Dr. Darwish has a wealth of academic experience and has authored multiple publications which include papers in international journals and conference proceedings. His publications have appeared in international journals, conferences and publishing houses such as IEEE, Springer and Science Direct (Elsevier). Dr. Darwish is editor for 16 prestigious international journals and member of many computing associations. Currently, Dr Darwish is the vice chair of the Scientific Research Group in Egypt (SRGE) in Computer Science and Information Technology. Dr. Darwish is the Ex-Cultural and Educational Attach, Embassy of Egypt to Kazakhstan and Central Asia from 2011 to 2014.