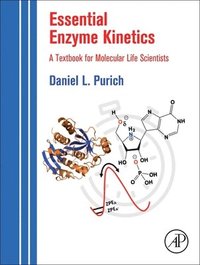 A Textbook for Molecular Life Scientists

Dr. Purich earned his Doctor of Philosophy degree in 1973 for his kinetic characterization of brain hexokinase under the preceptorship of Professor Herbert J. Fromm in the Department of Biochemistry & Biophysics at Iowa State University. As a Staff Research Fellow with Dr. Earl Stadtman at the National Institutes of Health, he conducted research on the cascade of covalent interconverting enzymes that control the glutamine synthetase reaction in Escherichia coli. Dr. Purich subsequently joined the Department of Chemistry at the University of California Santa Barbara where he rose through the ranks as Assistant Professor (1973-78), Associate Professor (1978-82), and Professor (1982-84). At UC Santa Barbara, he was awarded an Alfred P. Sloan Fellow in Chemistry (1978-80), an NIH Research Career Development Award (1978-1983), and the Campus-wide Outstanding Teacher Award (1978). In 1984, he assumed the post of Professor and Chairman of the Department of Biochemistry & Molecular Biology at the University of Florida College of Medicine, and in 1996 he retired as Chairman to resume full-time activities as a professor. Dr. Purich has served on the editorial boards of the Journal of Biological Chemistry (1981-87) and Archives of Biochemistry and Biophysics (1975-85), and as a regular member of the NIH Biochemistry Study Section. Professor Purich succeeds the late Alton Meister as series editor for Advances in Enzymology, and he continues to edit the multi-volume treatise "Enzyme Kinetics & Mechanism" appearing as volumes 63, 64, 87, and 249 in Methods in Enzymology. He has also published Contemporary Enzyme Kinetics and Mechanism (1st ed.,1983; 2nd ed.,1996) based on chapters selected from his Methods volumes.