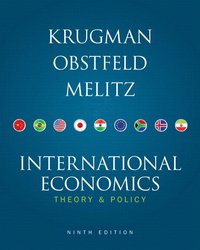 Nobel Prize winning economist Paul Krugman, renowned researcher Maurice Obstfeld, and new co-author Marc Melitz of Harvard University, continue to set the standard for International Economics courses with the text that remains the market leader in the U.S. and around the world.

International Economics: Theory and Policy is a proven approach in which each half of the book leads with an intuitive introduction to theory and follows with self-contained chapters to cover key policy applications.  Note: This is the standalone book if you want the book and Access Card for MyEconLab order the ISBN below:  013274483X / 9780132744836 International Economics: Theory and Policy, plus MyEconLab with Pearson Etext Student Access Code Card Package

Paul Krugman is a professor in the Department of Economics and in the Woodrow Wilson School of Public and International Affairs at PrincetonUniversity. Over the last 30 years, he has contributed to numerous academic journals as well as to the public discourse on economics and as an op-ed columnist for The New York Times. He is the author of over 20 bestselling books and has written more than 200 papers and articles for various professional journal volumes and newspapers. He is acclaimed in the field of economics for insights into international trade patterns that overturned long-held theories about the global economy. In 2008, he was awarded the Nobel Prize in economics and was recognized for his analysis of trade patterns and location of economic activity. Maurice Obstfeld is a Professor of Economics and Director of the Center for International and Development Economic Research (CIDER) at the University of California, Berkeley. He also serves as honorary advisor to the Bank of Japan's Institute of Monetary and Economic Studies. Among Professor Obstfeld's honors are the Carroll Round Keynote Lecture, Woodward Lecture, and Bernhard Harms Prize and Lecture in 2004. Professor Obstfeld is a Fellow of the Econometric Society and the American Academy of Arts and Sciences. He is active as a research Fellow of CEPR, a research associate at NBER, and an International Research Fellow at the Kiel Institute of World Economics. Marc Melitz is a Professor of Economics at Harvard University. He is an economist who specializes in international trade theory and has worked on the development of trade models that account for differences in productivity between firms. His research is focused on producer-level responses to globalization. The Melitz model helps to explain variations in export and foreign direct investment patterns and is now widely used in the field of international trade and has become a cornerstone of trade theory. Melitz is also associate editor of the Journal of International Economics and Economic Journal, a foreign editor for the Review of Economic Studies, and is a research fellow at the Center for Economic Policy Research and a faculty research fellow with the National Bureau of Economic Research. His research has been funded by the National Science Foundation, the Weatherhead Center for International Affairs, and the Alfred P. Sloan Foundation.