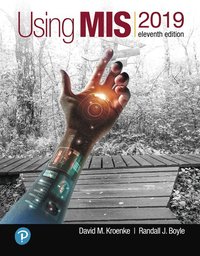 For introductory courses in IS (information systems) and MIS (management information systems). Mastering an essential business course Engaging and comprehensive, Using MIS helps students understand all the ways information systems are transforming the businesses of today and tomorrow. Its query-based format and creative learning aids challenge students to consider how they can anticipate and participate in that transformation. The 11th edition reflects key technological advancements and their impact on business strategy, including artificial intelligence, machine learning, and cloud-based services. New guides, exercises, and topical content keep the text current with rapid shifts in MIS and its applications. Also available with MyLab MIS By combining trusted author content with digital tools and a flexible platform, MyLab personalizes the learning experience and improves results for each student. And, with MIS Decision-Making Sims and Auto-Graded Excel(TM) and Access(TM) Projects, students learn how MIS concepts will help them succeed in their future careers. Note: You are purchasing a standalone product; MyLab MIS does not come packaged with this content. Students, if interested in purchasing this title with MyLab MIS, ask your instructor to confirm the correct package ISBN and Course ID. Instructors, contact your Pearson representative for more information. If you would like to purchase both the physical text and MyLab MIS, search for: 0135411238 / 978013541 1230 Using MIS P lus MyLab MIS with Pearson eText -- Access Card Package, 11/e Package consists of: 0135191769 / 9780135191767 Using MIS, 11/e 0135205492 / 9780135205495 MyLab MIS with Pearson eText -- Access Card -- for Using MIS, 11/e
Visa hela texten

David Kroenke has many years of teaching experience at Colorado State University, Seattle University, and the University of Washington. He has led dozens of seminars for college professors on the teaching of information systems and technology; in 1991, the International Association of Information Systems named him Computer Educator of the Year. In 2009, David was named Educator of the Year by the Association of Information Technology Professionals-Education Special Interest Group (AITP-EDSIG). David worked for the US Air Force and Boeing Computer Services. He was a principal in the startup of three companies, serving as the vice president of product marketing and development for the Microrim Corporation and as chief of database technologies for Wall Data, Inc. He is the father of the semantic object data model. David's consulting clients have included IBM(R), Microsoft(R), and Computer Sciences Corporations, as well as numerous smaller companies. Recently, David has focused on using information systems for teaching collaboration and teamwork. His text Database Processing was first published in 1977 and is now in its 15th edition. He has authored and coauthored many other textbooks, including Database Concepts, 8th Edition (2017), Experiencing MIS, 8th Edition (2018), SharePoint for Students (2012), Office 365 in Business (2012), and Processes, Systems, and Information: An Introduction to MIS, 3rd Edition (2018). Randall J. Boyle received his PhD in management information systems from Florida State University in 2003. He also has a master's degree in public administration and a BS in finance. He has received university teaching awards at Longwood University, the University of Utah, and the University of Alabama in Huntsville. He has taught a wide variety of classes, including Introduction to MIS, Cyber Security, Networking & Servers, System Analysis and Design, Telecommunications, Advanced Cyber Security, Decision Support Systems, and Web Servers. His research areas include deception detection in computer-mediated environments, secure information systems, the effects of IT on cognitive biases, the effects of IT on knowledge workers, and e-commerce. He has published in several academic journals and has authored several textbooks, including Experiencing MIS, 8th Edition; Corporate Computer and Network Security, 4th Edition; Applied Information Security, 2nd Edition; and Applied Networking Labs, 2nd Edition.