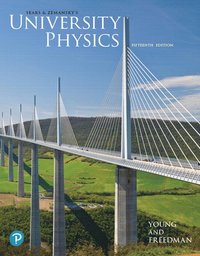 av Hugh D Young
Häftad Engelska, 2019-02-01
3209
Bevaka
Spara som favorit
Tillfälligt slut – klicka "Bevaka" för att få ett mejl så fort boken går att köpa igen.
For courses in calculus-based physics. Practice makes perfect: Guided practice helps students develop into expert problem solvers Practice makes perfect. The new 15th Edition of University Physics with Modern Physics draws on a wealth of data insights from hundreds of faculty and thousands of student users to address one of the biggest challenges for students in introductory physics courses: seeing patterns and making connections between problem types. Students learn to recognize when to use similar steps in solving the same problem type and develop an understanding for problem solving approaches, rather than simply plugging in an equation. This new edition addresses students' tendency to focus on the objects, situations, numbers, and questions posed in a problem, rather than recognizing the underlying principle or the problem's type. New Key Concept statements at the end of worked examples address this challenge by identifying the main idea used in the solution to help students recognize the underlying concepts and strategy for the given problem. New Key Example Variation Problems appear within new Guided Practice sections and group problems by type to give students practice recognizing when problems can be solved in a similar way, regardless of wording or numbers. These scaffolded problem sets help students see patterns, make connections between problems, and build confidence for tackling different problem types when exam time comes. The fully integrated problem-solving approach in Mastering Physics gives students instructional support and just-in-time remediation as they work through problems, and links all end-of-chapter problems directly to the eText for additional guidance. Also available with Mastering Physics By combining trusted author content with digital tools and a flexible platform, Mastering personalizes the learning experience and improves results for each student.Now providing a fully integrated experience, the eText is linked to every problem within Mastering for seamless integration between homework problems, practice problems, textbook, worked examples, and more. Note: You are purchasing a standalone product; Mastering Physics does not come packaged with this content. Students, if interested in purchasing this title with Mastering Physics, ask your instructor for the correct package ISBN and Course ID. Instructors, contact your Pearson representative for more information. If you would like to purchase both the physical text and Mastering Physics, search for: 0135159709 / 9780135159705 University Physics with Modern Physics Plus Mastering Physics with Pearson eText -- Access Card Package Package consists of: 013498868X / 9780134988689 Mastering Physics with Pearson eText -- ValuePack Access Card -- for University Physics with Modern Physics 0135159555 / 9780135159552 University Physics with Modern Physics
Visa hela texten

Roger A. Freedman is a Lecturer in Physics at the University of California, Santa Barbara. He was an undergraduate at the University of California campuses in San Diego and Los Angeles and did his doctoral research in nuclear theory at Stanford University under the direction of Professor J. Dirk Walecka. Dr. Freedman came to UCSB in 1981 after three years of teaching and doing research at the University of Washington. At UCSB, Dr. Freedman has taught in both the Department of Physics and the College of Creative Studies, a branch of the university intended for highly gifted and motivated undergraduates. He has published research in nuclear physics, elementary particle physics, and laser physics. In recent years, he has worked to make physics lectures a more interactive experience through the use of classroom response systems and pre-lecture videos. In the 1970s Dr. Freedman worked as a comic book letterer and helped organize the San Diego Comic-Con (now the world's largest popular culture convention) during its first few years. Today, when not in the classroom or slaving over a computer, Dr. Freedman can be found either flying (he holds a commercial pilot's license) or with his wife, Caroline, cheering on the rowers of UCSB Men's and Women's Crew. In Memoriam: Hugh Young (1930--2013) Hugh D. Young was Emeritus Professor of Physics at Carnegie Mellon University. He earned both his undergraduate and graduate degrees from that university. He earned his Ph.D. in fundamental particle theory under the direction of the late Richard Cutkosky. Dr. Young joined the faculty of Carnegie Mellon in 1956 and retired in 2004. He also had two visiting professorships at the University of California, Berkeley. Dr. Young's career was centered entirely on undergraduate education. He wrote several undergraduate-level textbooks, and in 1973 he became a coauthor with Francis Sears and Mark Zemansky for their well-known introductory textbooks. In addition to his role on Sears and Zemansky's University Physics, he was the author of Sears and Zemansky's College Physics. Dr. Young earned a bachelor's degree in organ performance from Carnegie Mellon in 1972 and spent several years as Associate Organist at St. Paul's Cathedral in Pittsburgh. He often ventured into the wilderness to hike, climb, or go caving with students in Carnegie Mellon's Explorers Club, which he founded as a graduate student and later advised. Dr. Young and his wife, Alice, hosted up to 50 students each year for Thanksgiving dinners in their home. Always gracious, Dr. Young expressed his appreciation earnestly: "I want to extend my heartfelt thanks to my colleagues at Carnegie Mellon, especially Professors Robert Kraemer, Bruce Sherwood, Ruth Chabay, Helmut Vogel, and Brian Quinn, for many stimulating discussions about physics pedagogy and for their support and encouragement during the writing of several successive editions of this book. I am equally indebted to the many generations of Carnegie Mellon students who have helped me learn what good teaching and good writing are, by showing me what works and what doesn't. It is always a joy and a privilege to express my gratitude to my wife, Alice, and our children, Gretchen and Rebecca, for their love, support, and emotional sustenance during the writing of several successive editions of this book. May all men and women be blessed with love such as theirs." We at Pearson appreciated his professionalism, good nature, and collaboration. He will be missed. A. Lewis Ford is Professor of Physics at Texas A&M University. He received a B.A. from Rice University in 1968 and a Ph.D. in chemical physics from the University of Texas at Austin in 1972. After a one-year postdoc at Harvard University, he joined the Texas A&M physics faculty in 1973 and has been there ever since. Professor Ford has specialized in theoretical atomic physics-in particular, atomic collisions. At Texas A&M he has taught a variety of undergraduate