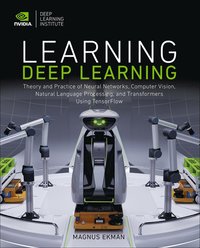 av Magnus Ekman
Häftad Engelska, 2021-10-04
399
Köp
Spara som favorit
Kan levereras innan julafton!
NVIDIA's Full-Color Guide to Deep Learning with TensorFlow: All You Need to Get Started and Get Results Deep learning is a key component of today's exciting advances in machine learning and artificial intelligence. Learning Deep Learning is a complete guide to deep learning with TensorFlow, the #1 Python library for building these breakthrough applications. Illuminating both the core concepts and the hands-on programming techniques needed to succeed, this book is ideal for developers, data scientists, analysts, and others--including those with no prior machine learning or statistics experience. After introducing the essential building blocks of deep neural networks, Magnus Ekman shows how to use fully connected feedforward networks and convolutional networks to solve real problems, such as predicting housing prices or classifying images. You'll learn how to represent words from a natural language, capture semantics, and develop a working natural language translator. With that foundation in place, Ekman then guides you through building a system that inputs images and describes them in natural language. Throughout, Ekman provides concise, well-annotated code examples using TensorFlow and the Keras API. (For comparison and easy migration between frameworks, complementary PyTorch examples are provided online.) He concludes by previewing trends in deep learning, exploring important ethical issues, and providing resources for further learning. Master core concepts: perceptrons, gradient-based learning, sigmoid neurons, and back propagation See how frameworks make it easier to develop more robust and useful neural networks Discover how convolutional neural networks (CNNs) revolutionize classification and analysis Use recurrent neural networks (RNNs) to optimize for text, speech, and other variable-length sequences Master long short-term memory (LSTM) techniques for natural language generation and other applications Move further into natural language-processing (NLP), including understanding and translation
Visa hela texten

Magnus Ekman, Ph.D., is a director of architecture at NVIDIA Corporation. His doctorate is in computer engineering, and he is the inventor of multiple patents. He was first exposed to artificial neural networks in the late nineties in his native country, Sweden. After some dabbling in evolutionary computation, he ended up focusing on computer architecture and relocated to Silicon Valley, where he lives with his wife Jennifer, children Sebastian and Sofia, and dog Babette. He previously worked with processor design and R&D at Sun Microsystems and Samsung Research America, and has been involved in starting two companies, one of which (Skout) was later acquired by The Meet Group, Inc. In his current role at NVIDIA, he leads an engineering team working on CPU performance and power efficiency for system on chips targeting the autonomous vehicle market. As the Deep Learning (DL) field exploded the past few years, fueled by NVIDIA's GPU technology and CUDA, Dr. Ekman found himself in the middle of a company expanding beyond computer graphics into becoming a deep learning (DL) powerhouse. As a part of that journey, he challenged himself to stay up-to-date with the most recent developments in the field. He considers himself to be an educator, and in the process of writing Learning Deep Learning ( LDL), he partnered with the NVIDIA Deep Learning Institute (DLI), which offers hands-on training in AI, accelerated computing, and accelerated data science. He is thrilled about DLI's plans to add LDL to its existing portfolio of self-paced online courses, live instructor-led workshops, educator programs, and teaching kits.