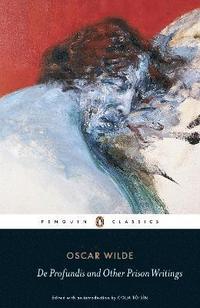 De Profundis and Other Prison Writings

av Oscar Wilde, Colm Toibin
Häftad Engelska, 2013-01-03
112
Köp
Spara som favorit
Finns även som
Visa alla 1 format & utgåvor
De Profundis and Other Prison Writings is a new selection of Oscar Wilde's prison letters and poetry in Penguin Classics, edited and introduced by Colm Toibin. At the start of 1895, Oscar Wilde was the toast of London, widely feted for his most recent stage success, An Ideal Husband. But by May of the same year, Wilde was in Reading prison sentenced to hard labour. 'De Profundis' is an epistolic account of Oscar Wilde's spiritual journey while in prison, and describes his new, shocking conviction that 'the supreme vice is shallowness'. This edition also includes further letters to his wife, his friends, the Home Secretary, newspaper editors and his lover Lord Alfred Douglas - Bosie - himself, as well as 'The Ballad of Reading Gaol', the heart-rending poem about a man sentenced to hang for the murder of the woman he loved. This Penguin edition is based on the definitive Complete Letters, edited by Wilde's grandson Merlin Holland. Colm Toibin's introduction explores Wilde's duality in love, politics and literature. This edition also includes notes on the text and suggested further reading. Oscar Wilde was born in Dublin. His three volumes of short fiction, The Happy Prince, Lord Arthur Savile's Crime and A House of Pomegranates, together with his only novel, The Picture of Dorian Gray, won him a reputation as a writer with an original talent, a reputation enhanced by the phenomenal success of his society comedies - Lady Windermere's Fan, A Woman of No Importance, An Ideal Husband and The Importance of Being Earnest. Colm Toibin is the author of five novels, including The Blackwater Lightship and The Master, and a collection of stories, Mothers and Sons. His essay collection Love in a Dark Time: Gay Lives from Wilde to Almodovar appeared in 2002. He is the editor of The Penguin Book of Irish Fiction.
Visa hela texten

Oscar Wilde (Author) Oscar Fingal O'Flahertie Wills Wilde was born in Dublin in 1854. He went to Trinity College, Dublin and then to Magdalen College, Oxford, where he began to propagandize the new Aesthetic (or 'Art for Art's Sake') Movement. Despite winning a first and the Newdigate Prize for Poetry, Wilde failed to obtain an Oxford scholarship, and was forced to earn a living by lecturing and writing for periodicals. After his marriage to Constance Lloyd in 1884, he tried to establish himself as a writer, but with little initial success. However, his three volumes of short fiction, The Happy Prince (1888), Lord Arthur Savile's Crime (1891) and A House of Pomegranates (1891), together with his only novel, The Picture of Dorian Gray (1891), gradually won him a reputation as a modern writer with an original talent, a reputation confirmed and enhanced by the phenomenal success of his Society Comedies - Lady Windermere's Fan, A Woman of No Importance, An Ideal Husband and The Importance of Being Earnest, all performed on the West End stage between 1892 and 1895. Success, however, was short-lived. In 1891 Wilde had met and fallen extravagantly in love with Lord Alfred Douglas. In 1895, when his success as a dramatist was at its height, Wilde brought an unsuccessful libel action against Douglas's father, the Marquess of Queensberry. Wilde lost the case and two trials later was sentenced to two years' imprisonment for acts of gross indecency. As a result of this experience he wrote The Ballad of Reading Gaol. He was released from prison in 1897 and went into an immediate self-imposed exile on the Continent. He died in Paris in ignominy in 1900. Colm Toibin (External Editor) Colm Toibin was born in Enniscorthy in 1955. He is the author of nine novels including The Master, Brooklyn, The Testament of Mary and Nora Webster and, most recently, House of Names. His work has been shortlisted for the Booker three times, won the Costa Novel Award and the Impac Award. He has also published two collections of stories and many works of non-fiction. He lives in Dublin.