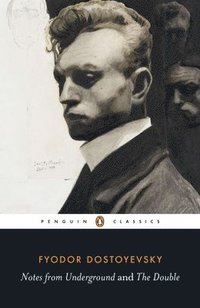 Notes from the Underground: AND The Double

av F M Dostoevsky
Häftad Engelska, 1973-07-01
199
Köp
Spara som favorit
Skickas inom 3-6 vardagar.
Fri frakt inom Sverige för privatpersoner.
"Notes from Underground" (1864) is a study of a single character, 'the real man of the Russian majority', and a revelation of Dostoyevsky's own deepest beliefs. One of his best critics has said of the first part that it forms his 'most utterly nakedpages. Never afterwards was he so fully and openly to reveal the inmost recesses, unmeant for display, of his heart.' "The Double" (1846) is the nightmarish story of Mr. Golyadkin, a man who is haunted or possessed by his own double. Is 'Mr. Golyadkinjunior' really a double or simply a earful side of his own nature? This uncertainty is what gives urgency and horror to a tale which may be read as a classic study of human breakdown.
Visa hela texten

Bloggat om Notes from the Underground: AND The Double

Fyodor Dostoyevsky was born in Moscow in 1821. His first story 'Poor Folk' was published in 1846 and was a great success. He was exiled to Siberia for five years for his participation in the 'Petrashevsky Circle'. He returned to Moscow to begin the review 'Vremya' (Time). Later in life he fell deeply in debt but his second marriage to Anna Snitkina helped him to put his affairs in order. He died in 1881, six months after delivering his famous speech for the unveiling of Pushkin's memorial.

"Notes from Underground". "The Double".