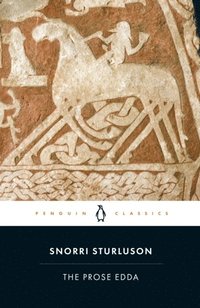 av Snorri Sturluson, Jesse L Byock
(3 röster)  |  Läs 1 recension
Häftad Engelska, 2004-09-01
199
Köp
Spara som favorit
Skickas inom 3-6 vardagar.
Fri frakt inom Sverige för privatpersoner.
Finns även som
Visa alla 2 format & utgåvor
The most renowned of all works of Scandinavian literature and our most extensive source of Norse mythology Written in Iceland a century after the close of the Viking Age, The Prose Edda tells ancient stories of the Norse creation epic and recounts the battles that follow as gods, giants, dwarves and elves struggle for survival. In prose interspersed with powerful verse, the Edda shows the gods' tragic realization that the future holds one final cataclysmic battle, Ragnarok, when the world will be destroyed. These tales have proved to be among the most influential of all myths and legends, inspiring works such as Wagner's Ring Cycle and Tolkien's The Lord of the Rings. Translated with an Introduction and notes by JESSE BYOCK
Visa hela texten

Snorri Sturlson (1179-1241) was an Icelandic descendant of the poet and hero from Egil's Saga, Egill Skallgrimsson. He was the best-known writer of the saga, author of the PROSE EDDA, which was written as a textbook for young poets who wished to praise kings, and HEIMSKRINGLA, a history of the kings of Norway, the most important prose collection in Old Norse literature. Jesse Bycock is Professor of Icelandic and Old Norse Literature at the University of California and has published widely on Medieval Iceland. For Penguin, he is the author of Viking Age Iceland (2001).