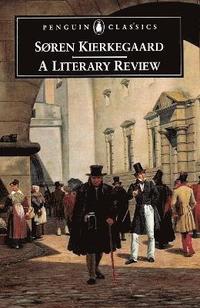 av Soren Kierkegaard
Häftad Engelska, 2001-10-01
299
Köp
Spara som favorit
Specialorder (osäker tillgång). Skickas inom 11-20 vardagar.
Fri frakt inom Sverige för privatpersoner.
Finns även som
Visa alla 1 format & utgåvor
While ostensibly commenting on the work of a contemporary novelist, Kierkegaard used this review as a critique of his society and age. The influence of this short piece has been far-reaching. The apocalyptic final sections are the source for central notions in Heidegger's Being and Time. Later readers have seized on the essay as a prophetic analysis of our own time. Its concepts have been drawn into current debates on identity, addiction, and social conformity.
Visa hela texten

Danish-born Scren Kierkegaard (1813-55) wrote on a wide variety of themes, including religion, psychology, and literature. He is remembered for his philosophy which was influential in the development of 20th century existentialism. Alastair Hannay is Professor of Philosophy at the University of Oslo. He is co-editor of the Cambridge Companion to Kierkegaard and has translated Kierkegaard's Fear and Trembling, The Sickness unto Death, Either/ Or, and Papers and Journals for Penguin Classics.