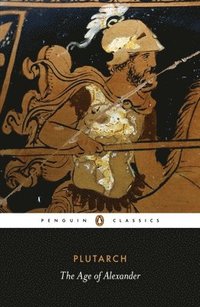 The Age of Alexander

av Plutarch, Timothy Duff
Häftad Engelska, 2011-06-30
169
Köp
Spara som favorit
Skickas inom 7-10 vardagar.
Fri frakt inom Sverige för privatpersoner.
The Parallel Lives of Plutarch are cornerstones of Western literature, and have exerted a profound influence on writers and statesmen since the Renaissance, most notably Shakespeare. This selection of ten biographies spans the period from the start of the fourth century BC to the early third, and covers some of the most important figures in Greek history, such as the orator Demosthenes and Alexander the Great, as well as lesser known figures such as Plato's pupil Dion of Syracuse. Each Life is an important work of literature in itself, but taken together they provide a vivid picture of the Greek world during a period that saw the collapse of Spartan power, the rise of Macedonia, the conquests of Alexander and the wars of his successors. Timothy Duff's revised version of Ian Scott-Kilvert's translations is accompanied by a new general introduction, and introductions and notes to each Life. He has also added two Lives previously not included: Artaxerxes I, Great King of Persia from 405 to 359 BC, and Eumenes of Cardia, one of Alexander's officers.
Visa hela texten

Bloggat om The Age of Alexander

PLUTARCH (c. AD 45-120), the Greek philosopher, lived at the height of the Roman Empire and is author of one of the largest and collections of writings to have survived from Classical antiquity. His work is traditionally divided into two: the Moralia, which include a vast range of philosophical, scientific, moral and rhetorical works, and the Lives or biographies. Almost fifty such biographies survive, most from his collection of Parallel Lives, in which biographies of Greek and Roman statesmen are arranged in pairs. IAN SCOTT-KILVERT was Director of English Literature at the British Council and Editor of Writers and the Works. He also translated Cassius Dio's The Roman History as well as Plutarch's The Rise and Fall of Athens: Nine Greek Lives and Makers of Rome for Penguin Classics. He died in 1989. TIMOTHY E. DUFF is Reader in Classics at the University of Reading. He is author of Plutarch's Lives: Exploring Virtue and Vice (Oxford 1999), and the Greek and Roman Historians (Duckworth 2003) and has published extensively on Plutarch.