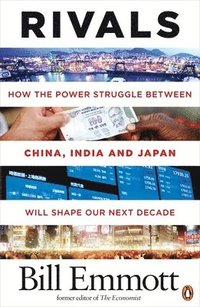 How the power struggle between China, India and Japan will shape our next decade

av Bill Emmott
Häftad Engelska, 2009-05-07
159
Köp
Spara som favorit
Specialorder (osäker tillgång). Skickas inom 11-20 vardagar.
Fri frakt inom Sverige över 159 kr för privatpersoner.
Finns även som
Visa alla 2 format & utgåvor
The world is changing, as political and economic power shift further towards Asia. In this penetrating book Bill Emmott shows the ways in which our future will be dominated not by one, but by three Asian giants - China, India and a newly resurgent Japan. How will competition between the emergent great powers in the East affect the West? What will the potential benefits, tensions and danger zones be? Emmott, former editor of the Economist, is one of the world's most authoritative international commentators. In Rivals he has written the essential book for understanding how this new power game will shape the twenty-first century.
Visa hela texten

'Elegantly written and strong on economic analysis' - Malcolm Moore, Saturday Telegraph 'Remarkable for the clarity of its economic and historical analysis and the cogency of his arguments' - Victor Mallet, Financial Times 'Rivals is clever and concise' - Michael Sheridan, Sunday Times

Bill Emmott was editor of the Economist from 1993 until 2006, where he presided over a doubling of the magazine's circulation. He has written six books on Japan, and, most recently, 20:21 Vision - 20th century lessons for the 21st century, published in February 2003 by Penguin. He is a member of the President's Council of the University of Tokyo, a director of the UK-Japan 21st Century Group, and co-chairman of the Canada-Europe Roundtable for Business. He has honorary degrees from Warwick and City Universities, and is an honorary fellow of Magdalen College, Oxford.