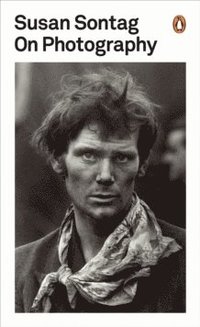 av Susan Sontag
(2 röster)
Häftad Engelska, 2008-09-25
132
Köp
Spara som favorit
Finns även som
Visa alla 4 format & utgåvor
Susan Sontag's On Photography is a seminal and groundbreaking work on the subject. Susan Sontag's groundbreaking critique of photography asks forceful questions about the moral and aesthetic issues surrounding this art form. Photographs are everywhere, and the 'insatiability of the photographing eye' has profoundly altered our relationship with the world. Photographs have the power to shock, idealize or seduce, they create a sense of nostalgia and act as a memorial, and they can be used as evidence against us or to identify us. In these six incisive essays, Sontag examines the ways in which we use these omnipresent images to manufacture a sense of reality and authority in our lives. 'Sontag offers enough food for thought to satisfy the most intellectual of appetites'The Times 'A brilliant analysis of the profound changes photographic images have made in our way of looking at the world, and at ourselves'Washington Post 'The most original and illuminating study of the subject'New Yorker One of America's best-known and most admired writers, Susan Sontag was also a leading commentator on contemporary culture until her death in December 2004. Her books include four novels and numerous works of non-fiction, among them Regarding the Pain of Others, On Photography, Illness as Metaphor, At the Same Time, Against Interpretation and Other Essays and Reborn: Early Diaries 1947-1963, all of which are published by Penguin. A further eight books, including the collections of essays Under the Sign of Saturn and Where the Stress Falls, and the novels The Volcano Lover and The Benefactor, are available from Penguin Modern Classics.
Visa hela texten

"A brilliant analysis of the profound changes photographic images have made in our way of looking at the world and at ourselves over the last 140 years."--"Washington Post Book World" "Every page of "On Photography" raises important and exciting questions about its subject and raises them in the best way.""--""The New York Times Book Review" "A book of great importance and originality . . . All future discussion or analysis of the role of photography in the affluent mass-media societies are now bound to begin with her book."--John Berger "Not many photographs are worth a thousand of [Susan Sontag's] words."--Robert Hughes, Time "After Sontag, photography must be written about not only as a force in the arts, but as one that is increasingly powerful in the nature and destiny of our global society."--"Newsweek" ""On Photography" is to my mind the most original and illuminating study of the subject."--Calvin Trillin, " The New Yorker"""

Susan Sontag was born in Manhattan in 1933 and studied at the universities of Chicago, Harvard and Oxford. Her non-fiction works include Against Interpretation, On Photography, Illness as Metaphor, AIDS and its Metaphors, Regarding the Pain of Others and At the Same Time. She is also the author of four novels, including The Volcano Lover and In America, as well as a collection of stories and several plays. Her books are translated into thirty-two languages. In 2001 she was awarded the Jerusalem Prize for the body of her work, and in 2003 she received the Prince of Asturias Prize for Literature and the Peace Prize of the German Book Trade. She died in December 2004.