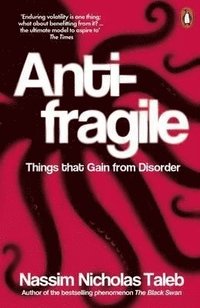 Things that Gain from Disorder

av Nassim Nicholas Taleb
(4 röster)  |  Läs 1 recension
Häftad Engelska, 2013-06-06
157
Köp
Spara som favorit
Finns även som
Visa alla 2 format & utgåvor
'Really made me think about how I think' - Mohsin Hamid, author of Exit West Tough times don't last. Tough people do. In The Black Swan, Taleb showed us that highly improbable and unpredictable events underlie almost everything about our world. Here Taleb stands uncer tainty on its head, making it desirable, even necessary. The antifragile is beyond the resilient or robust. The resil ient resists shocks and stays the same; the antifragile gets better and better. Just as human bones get stronger when subjected to stress and tension, many things in life benefit from stress, disorder, volatility, and turmoil. What Taleb has identified and calls antifragile are things that not only gain from chaos but need it in order to survive and flourish. Antifragile is a blueprint for living in a Black Swan world. Erudite, witty, and iconoclastic, Taleb's message is revolutionary: the antifragile, and only the antifragile, will make it. 'The hottest thinker in the world' Bryan Appleyard, Sunday Times
Visa hela texten

Really made me think about how I think -- Mohsin Hamid * Guardian * The hottest thinker in the world -- Bryan Appleyard * The Sunday Times * A superhero of the mind -- Boyd Tonkin Wall Street's principal dissident -- Malcolm Gladwell A guru for every would-be Damien Hirst, George Soros and aspirant despot -- John Cornwell * Sunday Times * Nassim Taleb, in his exasperating but compelling book Antifragile, praises "things that gain from disorder" - people, policies and institutions designed to thrive on volatility, instead of shattering in the encounter with it -- Oliver Burkman * Guardian * More than just robust or flexible, it actively thrives on disruption -- Julian Baggini * Guardian * Modern life is akin to a chronic stress injury. And the way to combat it is to embrace randomness in all its forms. . . Taleb is the great seer of the modern age * Guardian * Something antifragile actively thrives under the impact of the unexpected...to embrace randomness rather than trying to control it * The Sunday Times * Enduring volatility is one thing; what about benefiting from it? That is what Taleb calls 'antifragility' and he thinks that it is the ultimate model to aspire to - for individuals, financial institutions, even nations. . . May well capture a quality that you have long aspired to without having quite known quite what it is. . . I saw the world afresh * The Times * Taleb takes on everything from the mistakes of modern architecture to the dangers of meddlesome doctors and how overrated formal education is. . . . An ambitious and thought-provoking read . . . highly entertaining * Economist * This is a bold, entertaining, clever book, richly crammed with insights, stories, fine phrases and intriguing asides. . . . I will have to read it again. And again * Wall Street Journal * [Taleb] writes as if he were the illegitimate spawn of David Hume and Rev. Bayes, with some DNA mixed in from Norbert Weiner and Laurence Sterne. . . . Taleb is writing original stuff-not only within the management space but for readers of any literature-and . . . you will learn more about more things from this book and be challenged in more ways than by any other book you have read this year. Trust me on this * Harvard Business Review * What sometimes goes unsaid about Taleb is that he's a very funny writer. Taleb has a finely tuned BS detector, which he wields throughout the book to debunk pervasive yet pernicious ideas. . . . Antifragility isn't just sound economic and political doctrine. It's also the key to a good life * Fortune * At once thought-provoking and brilliant, this book dares you not to read it * Los Angeles Times *

Nassim Nicholas Taleb is an uncompromizing no-nonsense thinker for our times. He has spent his life immersing himself in problems of luck, uncertainty, probability, and knowledge, and he has led three high-profile careers around his ideas, as a man of letters, as a businessman-trader, and as a university professor and researcher. He is currently Distinguished Professor of Risk Engineering at New York University's School of Engineering. He is the author of the 4-volume INCERTO (Antifragile, The Black Swan, Fooled by Randomness, and The Bed of Procrustes). Taleb refuses all awards and honours as they debase knowledge by turning it into competitive sports.