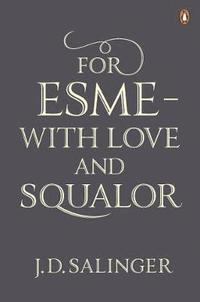 For Esme - with Love and Squalor

av J D Salinger
Häftad Engelska, 2010-03-04
99
Köp
Spara som favorit
Skickas inom 7-10 vardagar.
Fri frakt inom Sverige över 159 kr för privatpersoner.
Finns även som
Visa alla 2 format & utgåvor
A collection of nine exceptional stories from the much-loved author of The Catcher in the RyeAn American soldier has a strange encounter with an orphaned English teenager the night before he leaves for war. A four-year-old boy runs away in a dinghy; a missionary's child is kidnapped by Chinese bandits. A honeymoon in Florida goes awry with tragic consequences. Including the first stories to feature Salinger's beloved Glass family characters, this brilliantly varied collection offers a vivid introduction to the work of one of the most admired and widely read American novelists of the twentieth century. Witty, urbane and frequently affecting, For Esme - with Love and Squalor sits alongside Salinger's very best work - a gem that will be passed down for many generations to come.
Visa hela texten

Bloggat om For Esme - with Love and Squalor

J.D. Salinger was born in 1919 and died in January 2010. He grew up in New York City, and wrote short stories from an early age, but his breakthrough came in 1948 with the publication in the New Yorker of 'A Perfect Day for Bananafish'. The Catcher in the Rye was his first and only novel, published in 1951. It remains one of the most translated, taught and reprinted texts, and has sold some 65 million copies. Salinger also wrote several novellas and short stories, including Franny and Zooey, For Esme - With Love and Squalor, and Raise High the Roof Beam, Carpenters and Seymour: An Introduction.