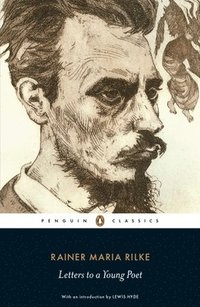 Letters to a Young Poet

av Rainer Maria Rilke
Häftad Engelska, 2012-04-05
102
Köp
Spara som favorit
Finns även som
Visa alla 8 format & utgåvor
At the start of the twentieth century, Rainer Maria Rilke wrote a series of letters to a young officer cadet, advising him on writing, love, sex, suffering and the nature of advice itself; these profound and lyrical letters have since become hugely influential for writers and artists of all kinds. This book also contains the 'Letter from a Young Worker', a striking polemic against Christianity written in letter-form, near the end of Rilke's life. In Lewis Hyde's introduction, he explores the context in which these letters were written and how the author embraced his isolation as a creative force. Charlie Louth's afterword discusses the similarities and contrasts of the two works, and Rilke's religious and sexual wordplay. This edition also contains a chronology, notes, and suggested further reading.
Visa hela texten

...I cannot think of a better book to put into the hands of any young would-be poet, as an inspirational guide to poetry and to surviving as a poet in a hostile world. -- Harry Fainlight * The Times *

Rainer Maria Rilke was born in 1875 in Prague. He studied literature, art history and philosophy in both Munich and Prague, and is often considered one of the German language's greatest 20th century poets. His two most famous verse sequences are the Sonnets to Orpheus and the Duino Elegies; his two most famous prose works are the Letters to a Young Poet and the semi-autobiographical The Notebooks of Malte Laurids Brigge. Charlie Louth was born in 1969 in Bristol. He is a Fellow of the Queen's College, Oxford, where he lectures in German. He is the author of Hoelderlin and the Dynamics of Translation (1998). Lewis Hyde is a poet, essayist, translator, and cultural critic. A MacArthur Fellow and former director of undergraduate creative writing at Harvard University, Hyde is a Fellow at Harvard's Berkman Center for Internet and Society.