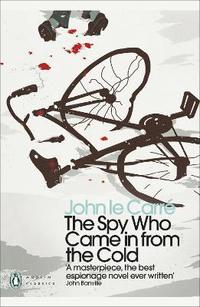 The Spy Who Came in from the Cold

Köp
Spara som favorit
Kan levereras innan julafton!
Finns även som
Visa alla 7 format & utgåvor
From the master of spy thrillers, John le Carre's The Spy Who Came in from the Cold is a gripping story of love and betrayal at the height of the Cold War. This Penguin Modern Classics edition includes an afterword by the author and an introduction by William Boyd, author of Any Human Heart. Alec Leamas is tired. It's the 1960s, he's been out in the cold for years, spying in the shadow of the Berlin Wall for his British masters. He has seen too many good agents murdered for their troubles. Now Control wants to bring him in at last - but only after one final assignment. He must travel deep into the heart of Communist Germany and betray his country, a job that he will do with his usual cynical professionalism. But when George Smiley tries to help a young woman Leamas has befriended, Leamas's mission may prove to be the worst thing he could ever have done. In le Carre's breakthrough work of 1963, the spy story is reborn as a gritty and terrible tale of men who are caught up in politics beyond their imagining. 'A portrait of a man who has lived by lies and subterfuge for so long, he's forgotten how to tell the truth' Time 'He can communicate emotion, from sweating fear to despairing love, with terse and compassionate conviction. Above all, he can tell a tale' Sunday Times
Visa hela texten

Superbly constructed, with an atmosphere of chilly hell -- J.B. Priestley The best spy story I have ever read -- Graham Greene The master storyteller ... has lost none of his cunning -- A. N. Wilson I have re-read The Spy Who Came In From The Cold over and over again since I first encountered it in my teens, just to remind myself how extraordinary a work of fiction can be. * Malcolm Gladwell * One of those very rare novels that changes the way you look at the world. Unflinching, highly sophisticated, superb. * William Boyd *

John le Carre was born in 1931. For six decades, he wrote novels that came to define our age. The son of a confidence trickster, he spent his childhood between boarding school and the London underworld. At sixteen he found refuge at the university of Bern, then later at Oxford. A spell of teaching at Eton led him to a short career in British Intelligence (MI5&6). He published his debut novel, Call for the Dead, in 1961 while still a secret servant. His third novel, The Spy Who Came in from the Cold, secured him a worldwide reputation, which was consolidated by the acclaim for his trilogy Tinker Tailor Soldier Spy, The Honourable Schoolboy and Smiley's People. At the end of the Cold War, le Carre widened his scope to explore an international landscape including the arms trade and the War on Terror. His memoir, The Pigeon Tunnel, was published in 2016 and the last George Smiley novel, A Legacy of Spies, appeared in 2017. He died on 12 December 2020. His posthumous novel Silverview was published in 2021. William Boyd was born in 1952 in Accra, Ghana, and grew up there and in Nigeria. He is the author of sixteen highly acclaimed, bestselling novels and five collections of stories. He is married and divides his time between London and south-west France. His most recent novel, Trio, was a Sunday Times bestseller.