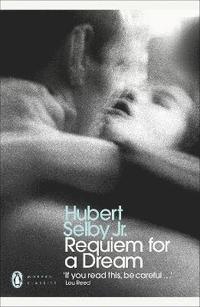 Requiem for a Dream

av Hubert Selby Jr
Häftad Engelska, 2012-04-26
129
Köp
Spara som favorit
Skickas inom 7-10 vardagar.
Fri frakt inom Sverige över 159 kr för privatpersoner.
Kan levereras innan jul!
Harry Goldfarb, heroin addict and son of lonely widow Sara, cares only about enjoying the good life with girlfriend Marion and best friend Tyrone C Love, and making the most of all the hash, poppers and dope they can get. Sara Goldfarb sits at home with the TV, dreaming of the life she could have and struggling with her own addictions - food and diet pills. But these four will pay a terrible price for the pleasures they believe they are entitled to. A passionate, heart-breaking tale of the crushing weight of hope and expectation, Requiem for a Dream is a dark modern-day fable of New York.
Visa hela texten

Selby brings a scorching light to a limited area of human existence, which most people know of but do not know * Newsweek * Selby deploys street slang, common speech, argot and scatology to create a high poetic art ... it seems to derive from the greatest American poetry--Whitman, Pound, Williams, and Olson * The Nation * Selby's place is in the front rank of American novelists ... to understand his work is to understand the anguish of America * New York Times Book Review *

Hubert Selby, Jr. was born in Brooklyn in 1928. At the age of 15, he dropped out of school and went to sea with the merchant marines. While at sea he was diagnosed with lung disease. With no other way to make a living, he decided to try writing: 'I knew the alphabet. Maybe I could be a writer.' In 1964 he completed his first book, Last Exit to Brooklyn, which has since become a cult classic. In 1966, it was the subject of an obscenity trial in the UK. His other books include The Room, The Demon, Requiem for a Dream, Song of the Silent Snow, The Willow Tree and Waiting Period. In 2000, Requiem for a Dream starred Jared Leto and Ellen Burstyn and was directed by Darren Aronofsky. Hubert Selby Jr died in Highland Park, Los Angeles, California in April 2004.