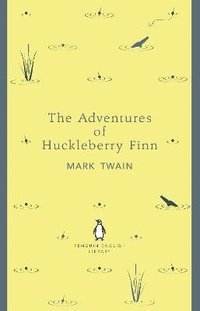 The Adventures of Huckleberry Finn

av Mark Twain
Häftad Engelska, 2012-04-26
83
Köp
Spara som favorit
Finns även som
Visa alla 8 format & utgåvor
The Penguin English Library Edition of The Adventures of Huckleberry Finn by Mark Twain 'I'm unfavorable to killin' a man as long as you can git around it; it ain't good sense, it ain't good morals. Ain't I right?' The original Great American Novel, an incomparable adventure story and a classic of anarchic humour, Twain's masterpiece sees Huckleberry Finn and Jim the slave escape their difficult lives by fleeing down the Mississippi on a raft. There, they find steamships, feuding families, an unlikely Duke and King and vital lessons about the world in which they live. With its unforgettable cast of characters, Hemingway called this 'the best book we've ever had'. The Penguin English Library - 100 editions of the best fiction in English, from the eighteenth century and the very first novels to the beginning of the First World War.
Visa hela texten

Born Samuel Langhorne Clemens in 1835, Mark Twain spent his youth in Hannibal, Missouri, which forms the setting for his two greatest works, The Adventures of Tom Sawyer and The Adventures of Huckleberry Finn. Trying his hand at printing, typesetting and then gold-mining, the former steam-boat pilot eventually found his calling in journalism and travel writing. Dubbed 'the father of American literature' by William Faulkner, Twain died in 1910 after a colourful life of travelling, bankruptcy and great literary success.