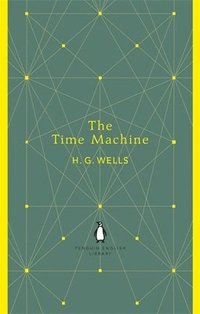 av H G Wells
Häftad Engelska, 2012-05-31
69
Köp
Spara som favorit
Skickas inom 7-10 vardagar.
Fri frakt inom Sverige över 159 kr för privatpersoner.
Beställ boken senast fredag 11 december kl. 12:45 för leverans innan julafton
Finns även som
Visa alla 8 format & utgåvor
The Penguin English Library Edition of The Time Machine by H. G. Wells 'Great shapes like big machines rose out of the dimness, and cast grotesque black shadows, in which dim spectral Morlocks sheltered from the glare' Chilling, prophetic and hugely influential, The Time Machine sees a Victorian scientist propel himself into the year 802,701 AD, where he is delighted to find that suffering has been replaced by beauty and contentment in the form of the Eloi, an elfin species descended from man. But he soon realizes that they are simply remnants of a once-great culture - now weak and living in terror of the sinister Morlocks lurking in the deep tunnels, who threaten his very return home. H. G. Wells defined much of modern science fiction with this 1895 tale of time travel, which questions humanity, society, and our place on Earth. The Penguin English Library - 100 editions of the best fiction in English, from the eighteenth century and the very first novels to the beginning of the First World War.
Visa hela texten

H.G. Wells was a professional writer and journalist who published more than a hundred books, including pioneering science fiction novels, histories, essays and programmes for world regeneration. He was a founding member of numerous movements including Liberty and PEN International - the world's oldest human rights organization - and his Rights of Man laid the groundwork for the 1948 Universal Declaration of Human Rights. Wells' controversial and progressive views on equality and the shape of a truly developed nation remain directly relevant to our world today. He was, in Bertrand Russell's words, 'an important liberator of thought and action'.