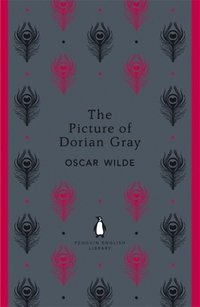 The Picture of Dorian Gray

av Oscar Wilde
(3 röster)
Häftad Engelska, 2012-06-28
106
Köp
Spara som favorit
Finns även som
Visa alla 9 format & utgåvor
The Penguin English Library Edition of The Picture of Dorian Gray by Oscar Wilde 'I am jealous of everything whose beauty does not die. I am jealous of the portrait you have painted of me ... Why did you paint it? It will mock me some day - mock me horribly!' A story of evil, debauchery and scandal, Oscar Wilde's only novel tells of Dorian Gray, a beautiful yet corrupt man. When he wishes that a perfect portrait of himself would bear the signs of ageing in his place, the picture becomes his hideous secret, as it follows Dorian's own downward spiral into cruelty and depravity. The Picture of Dorian Gray is a masterpiece of the evil in men's hearts, and is as controversial and alluring as Wilde himself. The Penguin English Library - 100 editions of the best fiction in English, from the eighteenth century and the very first novels to the beginning of the First World War.
Visa hela texten

Oscar Wilde was born in Ireland in 1854 and educated in Dublin and Oxford. He became the leading exponent of aestheticism and a famous wit, intellectual and raconteur. He wrote children's stories, poetry, philosophical essays and several hugely popular plays, but The Picture of Dorian Gray was his only novel. The book was a succes de scandale, and later used as evidence against Wilde at the Old Bailey in 1895, when he was tried and imprisoned for homosexual acts. Wilde died in 1900 in exile in Paris.