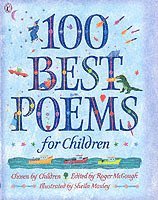 av Roger McGough
Häftad Engelska, 2002-10-01
6-9 år
140
Köp
Spara som favorit
A collection of the very best poems for children, edited by Roger McGough A wonderful collection of contemporary and classic poems chosen by children from schools around the UK. Roger McGough made the final selection and wrote the introduction. Roger McGough was born in Liverpool and educated at the University of Hull. He came to prominence in the 1960s with the publication of THE MERSEY SOUND, and is one of today's most popular poets. He writes for children and adults and performs his poetry all over the world. He was honoured with an OBE in 1997, and won the Signal Poetry Award in 1998. Roger now lives in London. Sheila Moxley is gaining a powerful reputation for her multi-cultural illustration. She lives in London.
Visa hela texten

Roger McGough (External Editor) Roger McGough was a member of the group Scaffold in the 1960s when he contributed poems to the Penguin title The Mersey Sound, which has since sold over a million copies and is now available as a Penguin Classic. He has published many books of poems for children and adults, and both his Collected Poems (2004) and Selected Poems (2006) are also available in Penguin. He presents Poetry Please on Radio 4 and is President of the Poetry Society. He was honoured with the Freedom of the City of Liverpool in 2001 and with a CBE in 2005 for services to literature.