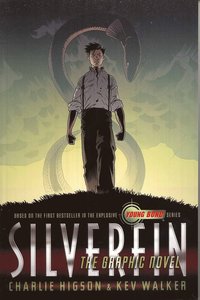 av Charlie Higson
Häftad Engelska, 2008-10-02
129
Köp
Spara som favorit
Skickas inom 5-8 vardagar.
Fri frakt inom Sverige för privatpersoner.
It's James Bond's first day at Eton, and already he's met his first enemy. This is the start of an adventure that will take him from the school playing fields to the remote shores of Loch Silverfin and a terrifying discovery that threatens to unleash a new breed of warfare.
Visa hela texten

Would have made Ian Fleming proud * Daily Telegraph * This graphic novel is a feast for the eyes as well as the imagination. * Fulham Gazette * James Bond's action adventures are perfect for a graphic novel, with more AAAAAGHH!, KER-BLOOSH! SMAKK and other onomatopoeia than you can shake a martini glass at. * Scotland on Sunday * More action, more demented crime and more flesh-crawling deaths than ever before -- - * Observer * Would have made Ian Fleming proud * Daily Telegraph * 'A page-turning adventure that will get the hairs standing up on the back of your neck' - Sunday Express'Good, gritty and funny . . . Very clever, Bond, very clever indeed' - Daily Mail

Charlie Higson is a well-known writer of screenplays and adult thriller novels. He's also a performer and co-creator of The Fast Show. He has written four mega-selling novels about Young Bond - Silverfin, Blood Fever, Double or Die, Hurricane Gold and his fifth, By Royal Command publishes in hardback in September.Kev Walker has been illustrating Young Bond since its debut in 2005. Since he began in 1988 he has worked for 2000AD, Games Workshop, DC Comics, Marvel Comics, Dark Horse and Wizards of the Coast.