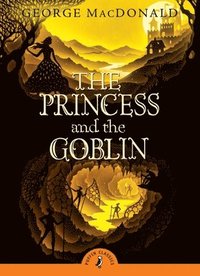 The Princess and the Goblin

av George MacDonald
Häftad Engelska, 1996-07-01
9-12 år
99
Köp
Spara som favorit
Skickas inom 5-8 vardagar.
Fri frakt inom Sverige över 159 kr för privatpersoner.
Finns även som
Visa alla 8 format & utgåvor
Princess Irene lives in a castle in a wild and lonely mountainous region. One day she discovers a steep and winding stairway leading to a bewildering labyrinth of unused passages with closed doors - and a further stairway. What lies at the top? Can the ring the princess is given protect her against the lurking menace of the boglins from under the mountain?
Visa hela texten

The Puffin Classics series is a perfect marriage of the old and the new. Enjoy some of the best books from the past and find out why and how they inspired some of the best writers of the present -- Julia Eccleshare Lovereading4kids

George MacDonald (Author) George MacDonald (1824-1905) was born in Scotland and moved to London after studying science at Aberdeen University. He became a part of the literary scene of the times and wrote poetry and novels for adults, turning quite late in life to writing fiction for children, inspired by his large family. At the Back of the North Wind was published in 1871, a fantasy masterpiece which had first been serialized in a magazine. The two following years saw the publication of his other two much-loved novels for children, The Princess and the Goblin and The Princess and the Curdie. Ursula Le Guin (Introducer) Ursula Le Guin was born in Berkley, California, in 1929, daughter of the writer Theodora Krober and the anthropologist Alfred Krober. Her published work includes twenty-one novels, eleven volumes of short stories, three collections of essays, twelve books for children, six volumes of poetry and four of translation. Among her novels are the The Left Hand of Darkness and The Dispossessed, both winners of the Nebula and Hugo awards, Always Coming Home, winner of the 1985 Kafka Award, and Four Ways to Forgiveness. In 2009 she won her sixth Nebula award for Powers. She died in January 2018 aged 88. Penguin/Puffin published the first volume of the Earthsea books, A Wizard of Earthsea, in 1971. The Earthsea books have been translated into many languages around the world and are global bestsellers.