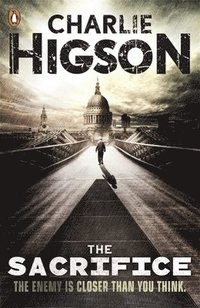 The Sacrifice (The Enemy Book 4)

av Charlie Higson
Häftad Engelska, 2013-04-04
12-15 år
103
Köp
Spara som favorit
Skickas inom 5-8 vardagar.
Fri frakt inom Sverige för privatpersoner.
The Sacrifice is the fourth gruesome and horrifying book in Charlie Higson's brilliant zombie series. The sickness destroyed everyone over the age of fourteen. All across London diseased adults are waiting, hungry predators with rotten flesh and ravaged minds. Small Sam and his unlikely ally, The Kid, have survived. They're safe with Ed and his friends at the Tower of London, but Sam is desperate to find his sister. Their search for Ella means Sam and The Kid must cross the forbidden zone. And what awaits them there is more terrifying than any of the horror they've suffered so far . . . ** 'Lord of the Flies with zombies' - Rick Riordan, creator of the Percy Jackson series. ** Charlie Higson is the bestselling author of Young Bond, and creator of The Fast Show. ** Perfect for bloodthirsty fans of Darren Shan and 28 Days Later.
Visa hela texten

Brutal, blood-soaked, full of zombies . . . it's ace * FHM * Lord of the Flies with zombies . . . tons of nail-biting action -- Rick Riordan, creator of the Percy Jackson series

Charlie Higson started writing when he was ten years old, but it was a long time before he got paid for doing it. On leaving university he was the singer in a pop group (The Higsons) before giving it up to become a painter and decorator. It was around this time that he started writing for television on Saturday Night Live. He went on to create the hugely successful comedy series The Fast Show, in which he also appeared. Other TV work includes Randall and Hopkirk (Deceased ) and Swiss Toni. He is the author of the bestselling Young Bond books, and The Sacrifice is the fourth book in his current horror series, The Enemy. Charlie doesn't do Facebook, but you can tweet him @monstroso.