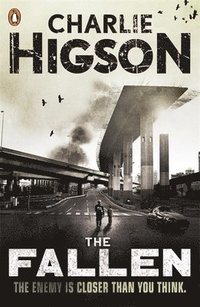 The Fallen (The Enemy Book 5)

av Charlie Higson
(1 röst)
Häftad Engelska, 2006-05-01
12-15 år
103
Köp
Spara som favorit
Skickas inom 5-8 vardagar.
Fri frakt inom Sverige för privatpersoner.
The Fallen by Charlie Higson is the fifth awesome book in The Enemy series. First the sickness rotted the adults' minds. Then their bodies. Now they stalk the streets, hunting human flesh. The Holloway crew are survivors. They've fought their way across London and made it to the Natural History Museum alive - just. But the fight will never end while the Enemy lives, unless there's another way. . . The kids at the museum are looking for a cure. All they need are medical supplies. To get them means a journey down unknown roads. Roads where not only crazed, hungry sickos hide in the shadows. SUDDENLY IT'S NOT SO CLEAR WHO - OR WHAT - THEY'RE FIGHTING. The fourth terrifying part of Charlie Higson's bestselling Enemy series. The Enemy is among us. . . ** 2013 is the year of zombies, with Brad Pitt's World War Z and Nicholas Holt's Warm Bodies films hitting cinemas. ** 'Lord of the Flies with zombies' - Rick Riordan, creator of the Percy Jackson series. ** Charlie Higson is the bestselling author of Young Bond, and creator of The Fast Show. ** Perfect for bloodthirsty fans of 28 Days Later and Darren Shan's Zom-B series.
Visa hela texten

Brutal, blood-soaked, full of zombies . . . it's ace * FHM * Lord of the Flies with zombies . . . tons of nail-biting action -- Rick Riordan, creator of the Percy Jackson series

Charlie Higson started writing when he was ten years old, but it was a long time before he got paid for doing it. On leaving university he was the singer in a pop group (The Higsons) before giving it up to become a painter and decorator. It was around this time that he started writing for television on Saturday Night Live. He went on to create the hugely successful comedy series The Fast Show, in which he also appeared. Other TV work includes Randall and Hopkirk (Deceased ) and Swiss Toni. He is the author of the bestselling Young Bond books, and The Fallen is the fifth book in his current horror series, The Enemy. Charlie doesn't do Facebook, but you can tweet him @monstroso.