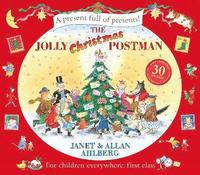 av Allan Ahlberg, Janet Ahlberg
Inbunden Engelska, 2014-10-02
145
Köp
Spara som favorit
Finns även som
Visa alla 1 format & utgåvor
A special edition of this classic picture book to celebrate its 30th anniversary - with festive foil on the cover! The award-winning Jolly Christmas Postman is the ultimate children's picture book. There should be a copy beneath every Christmas tree in every house with young children! It's Christmas Eve and the Jolly Postman is delivering greetings to various fairy-tale characters - there's a card for Baby Bear, a game appropriately called 'Beware' for Red Riding Hood from Mr Wolf, a get-well jigsaw for hospitalised Humpty Dumpty and three more surprise gifts. Allan Ahlberg has published over 100 children's books and with his late wife Janet, created many award-winning children's picture books, including It Was a Dark and Stormy Night, Funnybones, Each Peach Pear Plum and Peepo! The Jolly Christmas Postman is the seasonal sequel of, the Kate Greenaway Medal winning, The Jolly Postman which, after 35 years, remains one of the most innovative and interactive children's books available.
Visa hela texten

Allan Ahlberg, a former teacher, postman, plumber's mate and grave digger, is in the super-league of children's writers. He has published over 100 children's books and, with his late wife Janet, created such award winning picture books as EACH PEACH PEAR PLUM and THE JOLLY POSTMAN - both winners of the Kate Greenaway Medal. He has also written prize-winning poetry and fiction and lives in Sussex. Janet Ahlberg, along with Allan Ahlberg, created some of the world's most popular picture books, including EACH PEACH PEAR PLUM and THE JOLLY CHRISTMAS POSTMAN, both winners of Greenaway Medals, and THE BABY'S CATALOGUE, inspired by their daughter Jessica. Janet died in 1994.