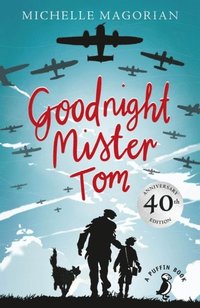 av Michelle Magorian
(1 röst)  |  Läs 1 recension
Häftad Engelska, 2014-07-03
12-15 år
89
Köp
Spara som favorit
Finns i lager! Skickas inom 1-2 vardagar.
Gratis frakt inom Sverige över 159 kr för privatpersoner.
Finns även som
Visa alla 6 format & utgåvor
The 40th anniversary of one of the best-loved stories set during the Second World War. Goodnight Mister Tom by Michelle Magorian is the unforgettable story of young Willie Beech, evacuated to the country as Britain stands on the brink of the Second World War. A sad, deprived child, he slowly begins to flourish under the unlikely care of grumpy old Tom Oakley. But then his new-found happiness is shattered by a summons from his mother to come back to London. As the weeks pass by Tom begins to worry when William doesn't answer his letters, so he goes to London to find him, and there makes a terrible discovery. Winner of the Guardian Children's Fiction Award.
Visa hela texten

Everyone's idea of a smash-hit first novel: full-blown characters to love and hate, moments of grief and joy, and a marvellous story that knows just how to grab the emotions * Guardian *

By the time MICHELLE MAGORIAN was eleven she had decided that the perfect life would be to spend half the year acting and the other half writing. After attending the Rose Bruford College of Theatre and Performance and Marcel Marceau's L'Ecole Internationale de Mime in Paris, she wrote between acting jobs and on Sundays when rehearsing and performing musicals and plays six days and six nights a week (as Mikki Magorian). In her twenties she became interested in children's books and began writing Goodnight Mister Tom - a winner of the Guardian Children's Fiction Prize and the International Reading Association Award. The musical version (composer Gary Carpenter) was a winner at the 1992 Quest Fest for New Musicals at Buxton Opera House. It has been adapted for television by Brian Finch and as a play by David Wood, broadcast as a radio series in Sweden and Norway, and been optioned by Gaumont for television. Michelle has written the book and lyrics for three more musicals and eight other novels, including award-winning Back Home and Just Henry, which won the Costa Award. She has recorded Back Home and A Little Love Song on Audible. Other audiobooks include Just Henry, read by the actor Richard Mitchley; and Goodnight Mister Tom, read by Christopher Saul for the RNIB (full version), and an abridged version read by Patrick Malahide. Michelle has a postgraduate certificate in Film Studies (London University/BFI), was awarded an honorary doctorate by Portsmouth University in 2007 and has been made a fellow by Rose Bruford College.