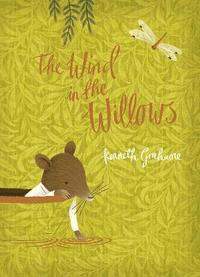 av Kenneth Grahame
Inbunden Engelska, 2017-04-03
6-9 år
129
Köp
Spara som favorit
Skickas inom 5-8 vardagar.
Fri frakt inom Sverige över 159 kr för privatpersoner.
This new hardback edition of The Wind in the Willows, the classic story loved by children and adults alike, has been created in partnership with the world-famous V&A Museum, with exquisite cover designs from their William Morris collection. Spring is in the air and Mole has found a wonderful new world. There's boating with Ratty, a feast with Badger and high jinx on the open road with that reckless ruffian, Mr Toad of Toad Hall. The four become the firmest of friends, but after Toad's latest escapade, can they join together and beat the wretched weasels?
Visa hela texten

Kenneth Grahame (1859-1932) was born in Edinburgh, but grew up with relatives in Berkshire where he developed his love for the countryside surrounding the upper parts of the River Thames. He was educated at St Edward's in Oxford, but instead of going on to Oxford University he joined the Bank of England, where he rose to become Secretary. He wrote several books including The Golden Age and Dream Days which includes the short story 'The Reluctant Dragon' (later made into a Disney movie). Kenneth Grahame developed the character of Toad in The Wind in the Willows to amuse his young son, Alistair. It was published in 1908 and still remains a best-loved children's classic.