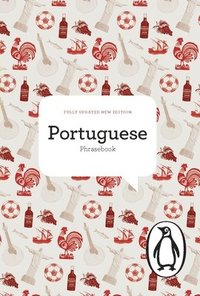 av Jill Norman, Natalia Pinazza
Häftad Engelska, 2006-05-01
79
Köp
Spara som favorit
Skickas inom 7-10 vardagar.
Fri frakt inom Sverige över 159 kr för privatpersoner.
An indispensable, fully up-to-date phrasebook for travellers to both Portugal and Brazil, in a pocket-size format and beautiful cover design This newly revised and updated Portuguese Phrase Book contains a wealth of useful words and phrases for travellers in both Portugal and Brazil, with a particular emphasis on Brazilian Portuguese. The book includes basic grammar, a pronunciation guide, additional vocabulary and phrases to suit every place, event and situation. Clearly presented and easy to use, it is the perfect pocket-sized travelling companion. - Essential phrases for travel, eating out, shopping, sightseeing - Numbers, times and dates - Pronunciation given - Grammar basics and vocabulary list - Designed for use in both Brazil and Portugal - Particular emphasis on Brazilian Portuguese
Visa hela texten

Jill Norman speaks several languages and has travelled widely. Jill also created the Penguin Cookery Library in the 1960s and 1970s, bringing many first-class authors to the list. She has since become a Glenfiddich Trophy winner in her own right, and is a leading authority on the use of herbs and spices. She is the literary trustee of the Elizabeth David estate, and worked with Mrs David for many years. Natalia Pinazza was born and raised in Sao Paulo, Brazil, and has studied and researched languages, literature, indigenous visual cultures and Argentine and Brazilian culture at the Universities of Sao Paulo (Brazil), Bath (United Kingdom) and Ottawa (Canada). She was nominated by the Brazilian government as the national candidate for the UNESCO Keizo Obuchi Fellowship Awards.