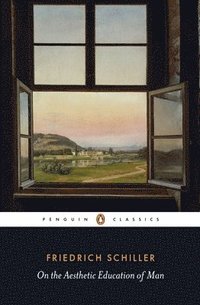 On the Aesthetic Education of Man

av Friedrich Schiller
Häftad Engelska, 2016-09-29
129
Köp
Spara som favorit
Skickas inom 5-8 vardagar.
Fri frakt inom Sverige över 159 kr för privatpersoner.
Finns även som
Visa alla 6 format & utgåvor
'Man defines himself by his deeds - and what kind of image of man do we see in the mirror of our present times?' The poet and dramatist Friedrich Schiller was also a profound philosopher, who described his work On the Aesthetic Education of Man as 'the best thing that I have done in my life'. This impassioned treatise analyses politics, revolution and human nature to define the relationship between beauty, art and morality. Expressed as a series of letters to a patron, it argues that only an aesthetic education - rather than government reform, religion or moral teachings - can achieve a truly free society, and must be placed at the heart of human experience. One of the most important works of German philosophy, its arguments remain as arresting and inspiring as when they were first written. Translated by Keith Tribe with an introduction and notes by Alexander Schmidt
Visa hela texten

Friedrich Schiller (1759-1805) was one of the greatest playwrights, poets, philosophers and historians writing in German. Penguin also publishes his plays Mary Stuart, The Robbers and Wallenstein. Some of the most productive years of his short life were spent in Jena and Weimar, where his creative friendship with Goethe has taken on a mythic status. His poem 'Ode to Joy' became the basis for the finale of Beethoven's Ninth Symphony and is now the European Union's anthem.