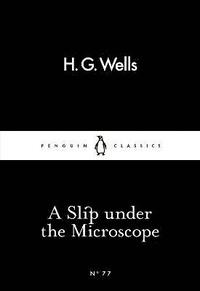 A Slip Under the Microscope

av H G Wells
(3 röster)
Häftad Engelska, 2015-02-26
32
Köp
Spara som favorit
Skickas inom 5-8 vardagar.
Gratis frakt inom Sverige över 159 kr för privatpersoner.
Finns även som
Visa alla 6 format & utgåvor
'I will go in, out of this dust and heat, out of this dry glitter of vanity, out of these toilsome futilities. I will go and never return.' Three disturbing, mysterious and moving stories from Wells, science-fiction pioneer. Introducing Little Black Classics: 80 books for Penguin's 80th birthday. Little Black Classics celebrate the huge range and diversity of Penguin Classics, with books from around the world and across many centuries. They take us from a balloon ride over Victorian London to a garden of blossom in Japan, from Tierra del Fuego to 16th-century California and the Russian steppe. Here are stories lyrical and savage; poems epic and intimate; essays satirical and inspirational; and ideas that have shaped the lives of millions. H. G. Wells (1866-1946). Wells's works available in Penguin Classics are Ann Veronica, The Country of the Blind and Other Selected Stories, The First Men in the Moon, The Invisible Man, The Island of Doctor Moreau, Kipps, Love and Mr Lewisham, A Modern Utopia, The New Machiavelli, The Shape of Things to Come, A Short History of the World, The Sleeper Awakes, The Time Machine, Tono-Bungay, The War in the Air and The War of the Worlds.
Visa hela texten

H.G. Wells was a professional writer and journalist who published more than a hundred books, including pioneering science fiction novels, histories, essays and programmes for world regeneration. He was a founding member of numerous movements including Liberty and PEN International - the world's oldest human rights organization - and his Rights of Man laid the groundwork for the 1948 Universal Declaration of Human Rights. Wells' controversial and progressive views on equality and the shape of a truly developed nation remain directly relevant to our world today. He was, in Bertrand Russell's words, 'an important liberator of thought and action'.