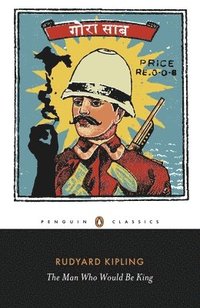 The Man Who Would Be King: Selected Stories of Rudyard Kipling

av Rudyard Kipling, Jan Montefiore
Häftad Engelska, 2011-03-03
159
Köp
Spara som favorit
Skickas inom 7-10 vardagar.
Fri frakt inom Sverige över 159 kr för privatpersoner.
Finns även som
Visa alla 1 format & utgåvor
Rudyard Kipling is one of the most magical storytellers in the English language. This new selection brings together the best of his short writings, following the development of his work over fifty years. They take us from the harsh, cruel, vividly realized world of the 'Indian' stories that made his name, through the experimental modernism of his middle period to the highly-wrought subtleties of his later pieces. Including the tale of insanity and empire, 'The Man Who Would Be King', the high-spirited 'The Village that Voted the Earth Was Flat', the fable of childhood cruelty and revenge 'Baa Baa, Black Sheep', the menacing psychological study 'Mary Postgate' and the ambiguous portrayal of grief and mourning in 'The Gardener', here are stories of criminals, ghosts, femmes fatales, madness and murder.
Visa hela texten

By the Winner of the Nobel Prize in Literature

Bloggat om The Man Who Would Be King: Selected Stori...

RUDYARD KIPLING was born in Bombay in 1865. In 1871 he was brought home from India and spent five unhappy years with a foster family in Southsea, an experience he later drew on in The Light That Failed (1890). In 1882 Kipling started work as a journalist in India, and while there produced a body of work, stories, sketches and poems - notably Plain Tales from the Hills (1888) - which made him an instant literary celebrity when he returned to England in 1889. His most famous works include The Jungle Book (1894), Kim (1901) and the Just So Stories (1902). Kipling refused to accept the role of Poet Laureate and other civil honours, but he was the first English writer to be awarded the Nobel Prize, in 1907. He died in 1936. JAN MONTEFIOIRE was born in 1948 and educated at Oxford. Since 1978 she has taught at the University of Kent, where she is now Professor of 20th Century English Literature. She is the author of Men and Women Writers of the 1930s (1996); Arguments of Heart and Mind:Selected Essays 1977-2000 (2002); Feminism and Poetry (3rd edition, 2004); and Rudyard Kipling (2007). She lives in Canterbury.