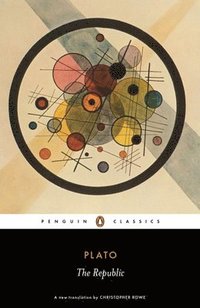 av Plato
Häftad Engelska, 2012-09-27
119
Köp
Spara som favorit
Finns även som
Visa alla 7 format & utgåvor
An authoritative new translation of Plato's The Republic by Christopher Rowe, with notes and an introduction. 'We set about founding the best city we could, because we could be confident that if it was good we would find justice in it' The Republic, Plato's masterwork, was first enjoyed 2,400 years ago and remains one of the most widely-read books in the world: as a foundational work of Western philosophy, and for the richness of its ideas and virtuosity of its writing. Presented as a dialogue between Plato's teacher Socrates and various interlocutors, it is an exhortation to philosophy, inviting its readers to reflect on the choices to be made if we are to live the best life available to us. This complex, dynamic work creates a picture of an ideal society governed not by the desire for money, power or fame, but by philosophy, wisdom and justice. Christopher Rowe's accurate and enjoyable new translation remains faithful to the many variations of the Republic's tone, style and pace. This edition also contains a chronology, further reading, an outline of the work's main arguments and an introduction discussing Plato's relationship with Socrates, and the Republic's style, ideas and historical context.
Visa hela texten

"Must we not acknowledge...that in each of us there are the same principles and habits which there are in the State; and that from the individual they pass into the State?" What does it mean to be good? What enables us to distinguish right from wrong? And how should human virtues be translated into a just society? These are the questions that Plato sought to answer in this monumental work of moral and political philosophy, a book surpassed only by the Bible in its formative influence on two thousand years of Western thought. In the course of its tautly reasoned Socratic dialogues, The Republic accomplishes nothing less than an anatomy of the soul and an exhaustive description of a State that both mirrors and enforces the soul's ideal harmony. The resulting text is at once mystical and elegantly logical and may be read as a template for the societies in which most of us live today. Vintage Classics are quality paperback editions of the world's greatest written works. They are durably bound and are printed exclusively on acid-free paper.

Plato (c.427-347 BC) stands with Socrates and Aristotle as one of the shapers of the whole intellectual tradition of the West. He founded in Athens the Academy, the first permanent institution devoted to philosophical research and teaching, and the prototype of all Western universities. Christopher Rowe was until 2009 Professor of Greek in Durham University. His co-edited publications include The Cambridge History of Greek and Roman Political Thought (2000), New Perspectives on Plato, Modern and Ancient (2002), Plato's Lysis (2005), and Plato and the Art of Philosophical Writing (2007). In Aristotle, Nicomachean Ethics (2002), Sarah Broadie's philosophical commentary is accompanied by Christopher Rowe's translation. His translation of Phaedrus appeared in Penguin Classics in 2005, and his new version of The Last Days of Socrates - comprising Euthyphro, Apology, Crito and Phaedo - was published in 2010. He was awarded an OBE in 2009 for services to scholarship.