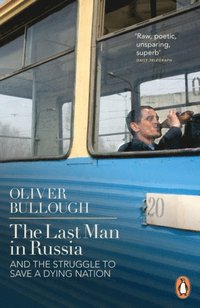 And The Struggle To Save A Dying Nation

av Oliver Bullough
E-bok (EPUB - DRM), Engelska, 2013-04-04
Den här boken kan endast laddas ned av privatpersoner.
103
Den här boken kan endast laddas ned av privatpersoner.
Ladda ned
Spara som favorit
Ladda ned och läs i en e-boksläsare. Tips på appar
Finns även som
Visa alla 1 format & utgåvor
From Oliver Bullough, the acclaimed author of the Orwell Prize-shortlisted, Let Our Fame Be Great, a study - part travelogue, part political analysis - of a nation in crisisThe Last Man in Russia is a portrait of the country like no other; a quest to understand the soul of Russia. Award-winning writer Oliver Bullough travels the country from crowded Moscow train to empty windswept village, following in the footsteps of one extraordinary man, the dissident Orthodox priest Father Dmitry. His moving, terrifying story is the story of a nation: famine, war, the frozen wastes of the Gulag, the collapse of communism and now, a people seeking oblivion. Bullough shows that in a country so willing to crush its citizens, there is also courage, resilience and flickering glimmers of hope.'Brisk, lucid style ... skilful interweaving of historical context with his own rich experience of Russia. [Bullough] has a talent for sketching the people he meets, often administering a welcome dose of humour ... and he appreciates the absurd, in the best Russian tradition ... an ambitious and wide-ranging journey' Arthur House, Sunday Telegraph'An extraordinary portrait of a nation struggling to shed its past and find peace with itself' Anthony Sattin, Sunday TimesOliver Bullough studied modern history at Oxford University and moved to Russia after graduating in 1999. He lived in St Petersburg, Bishkek and Moscow over the next seven years, travelling widely as a reporter for Reuters news agency. He is now the Caucasus Editor for the Institute of War and Peace Reporting. His first book, Let Our Fame Be Great: Journeys Among the Defiant People of the Caucasus, received the Cornelius Ryan award in the United States and was shortlisted for the Orwell Prize in Britain. Oliver Bullough received the Oxfam Emerging Writer award in 2011.
Visa hela texten