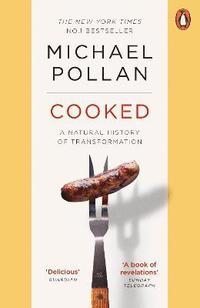 A Natural History of Transformation

av Michael Pollan
Häftad Engelska, 2014-04-03
129
Köp
Spara som favorit
Skickas inom 7-10 vardagar.
Fri frakt inom Sverige över 159 kr för privatpersoner.
Finns även som
Visa alla 3 format & utgåvor
THE INSPIRATION FOR THE NEW NETFLIX SERIES 'It's not often that a life-changing book falls into one's lap ... Yet Michael Pollan's Cooked is one of them.' SundayTelegraph 'This is a love song to old, slow kitchen skills at their delicious best' Kathryn Huges, GUARDIAN BOOKS OF THE YEAR The New York Times Top Five Bestseller - Michael Pollan's uniquely enjoyable quest to understand the transformative magic of cooking Michael Pollan's Cooked takes us back to basics and first principles: cooking with fire, with water, with air and with earth. Meeting cooks from all over the world, who share their wisdom and stories, Pollan shows how cooking is at the heart of our culture and that when it gets down to it, it also fundamentally shapes our lives. Filled with fascinating facts and curious, mouthwatering tales from cast of eccentrics, Cooked explores the deepest mysteries of how and why we cook.
Visa hela texten

Delicious -- Jay Rayner * Guardian * [Pollan] explores the same way a naturalist might, by studing the animals, plants and microbes involved in cooking, and delving into history, culture and chemistry ... he describes the remarkable transformations that take place in the humble saucepan ... Side by side with Mr Pollan the naturalist is the author as activist ... his book is a hymn to why people should be enticed back into the kitchen * Economist * Having described what's wrong with American food in his best-selling The Omnivore's Dilemma (2006), New York Times contributor Pollan delivers a more optimistic but equally fascinating account of how to do it right ... A delightful chronicle of the education of a cook who steps back frequently to extol the scientific and philosophical basis of this deeply satisfying human activity * Booklist * A thoughtful meditation on cooking that is both difficult to categorize and uniquely, inimitably his ... Intensely focused yet wide ranging, beautifully written, thought provoking, and, yes, fun, Pollan's latest is not to be missed by those interested in how, why, or what we cook and eat * Library Journal * Pollan eloquently explains how grilling with fire, braising (water), baking bread (air), and fermented foods (earth) have impacted our health and culture ... Engaging and enlightening * Publishers Weekly * As in The Omnivore's Dilemma, Pollan is never less than delightful, full of curiosity, insight, and good humor. This is a book to be read, savoured, and smudged with spatterings of olive oil, wine, butter, and the sulfuric streaks of chopped onion * Outside * Pollan's book is many things, among them a memoir of learning to master the absolute basics of culinary creation: fire, water, air and earth. As Pollan chats with cheesemaking nuns and discovers Walt Whitman's views on composting, he reminds us that cooking used to be all about connection - with the world around us, with other times and cultures, and with those we cook for ... this book [is] both approachable and rewarding -- Hephzibah Anderson * Prospect * [A] rare, ranging breed of narrative that manages to do all ... In Pollan's dexterous hands, we get the science, the history, the inspiration, ultimately the recipe. What feels like all of it. It doesn't hurt that he also happens to be very funny * Boston Globe * In Cooked, Pollan continues his campaign to get us to eat properly and pleasurably by making meals from scratch ... a warm, thoughtful narrative in which Pollan encounters everything from a surfing baker who makes the perfect sourdough to a cheese-making nun. This is a love song to old, slow kitchen skills at their delicious best -- Kathryn Hughes * Guardian BOOKS OF THE YEAR * It's not often that a life-changing book falls into one's lap ... Yet Michael Pollan's Cooked is one of them. One it's impossible to read and not act on ... Embrace bacteria, cook thoughtfully and slow, and taste some of the most luscious food you've ever eaten, this powerful book says. And do it for the people you love as well as the invisible soldiers inside you who are fighting to keep you strong. Cooked is a book of revelations for today's hungry human animal. Be changed by it * Sunday Telegraph *

Michael Pollan is an award-winning author, activist and journalist. His no.1 international bestselling books about the way we live today - including The Omnivore's Dilemma, In Defence of Food and Cooked (also a successful Netflix series) - combine meticulous reporting with anthropology, philosophy, culture, health and natural history. Time magazine has named him one of the hundred most influential people in the world. He lives in the Bay Area of California with his wife and son.