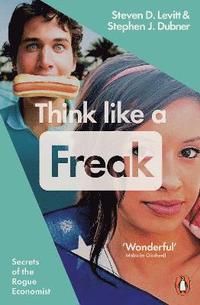 Secrets of the Rogue Economist

av Steven D Levitt, Stephen J Dubner
Häftad Engelska, 2015-06-18
108
Köp
Spara som favorit
Finns även som
Visa alla 2 format & utgåvor
In this Freak 'how-to' guide, the mavericks behind the Freakonomics phenomenon teach you their secrets: how to challenge conventional wisdom, unravel life's secret codes and think differently - that is, think like a Freak. Levitt and Dubner see the world like no-one else. Now you can too. 'My gut reaction to this life-changing book is "Where have you been all my life?" You will turn pages with delight' Jeffery Taylor, Sunday Express 'Captivating, intellectually robust, funny, surprising and wise. What else can one ask?' Daniel Finkelstein, The Times 'Illuminating, good fun, endearing, genial ... I was delighted' Philip Roscoe, The Times Higher Education 'It's about how to look at the world, and see the ugly truth ... excellent stuff' William Leith, Spectator 'A phenomenon ... their approach has won them a cult following' Observer
Visa hela texten

Think Like a Freak is not a book about how to understand magic tricks. That's what Dubner and Levitt's first two books - Freakonomics and SuperFreakonomics - were about. It's about the attitude we need to take towards the tricks and the problems that the world throws at us. Dubner and Levitt have a set of prescriptions about what that attitude comes down to, but at its root it comes down to putting yourself in the mind of the child, gazing upwards at the double lift: free yourself from expectations, be prepared for a really really simple explanation, and let your attention wander from time to time . . . Utterly captivating -- Malcolm Gladwell (author of Blink)

Steven D. Levitt, a professor of economics at the University of Chicago, was awarded the John Bates Clark medal, given to the most influential American economist under the age of forty. He is also a founder of The Greatest Good, which applies Freakonomics-style thinking to business and philanthropy. Stephen J. Dubner is an award-winning author, journalist, and radio and TV personality. He quit his first career-as an almost-rock-star-to become a writer. He has worked for The New York Times and published three non-Freakonomics books. He lives with his family in New York City.