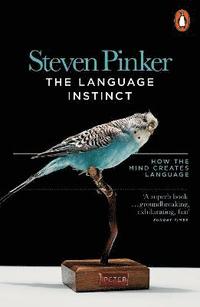 How the Mind Creates Language

av Steven Pinker
(1 röst)
Häftad Engelska, 2015-04-02
136
Köp
Spara som favorit
Skickas inom 2-5 vardagar.
Fri frakt inom Sverige för privatpersoner.
Finns även som
Visa alla 4 format & utgåvor
'Dazzling... Pinker's big idea is that language is an instinct...as innate to us as flying is to geese... Words can hardly do justice to the superlative range and liveliness of Pinker's investigations' - Independent 'A marvellously readable book... illuminates every facet of human language: its biological origin, its uniqueness to humanity, it acquisition by children, its grammatical structure, the production and perception of speech, the pathology of language disorders and the unstoppable evolution of languages and dialects' - Nature
Visa hela texten

Steven Pinker is one of the world's most influential thinkers and writers on the human condition. His popular and highly praised books include The Better Angels of Our Nature, The Sense of Style, The Stuff of Thought, The Blank Slate, How the Mind Works, and The Language Instinct. The recipient of several major awards for his teaching, books, and scientific research, Pinker is Harvard College Professor and Johnstone Family Professor of Psychology at Harvard University. He also writes frequently for The New York Times, the Guardian and other publications. He has been named Humanist of the Year, Prospect magazine's "The World's Top 100 Public Intellectuals," Foreign Policy's "100 Global Thinkers," and Time magazine's "The 100 Most Influential People in the World Today."