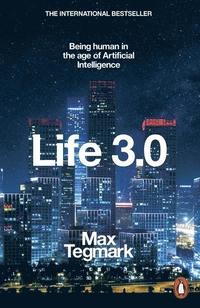 Being Human in the Age of Artificial Intelligence

av Max Tegmark
(2 röster)  |  Läs 1 recension
Häftad Engelska, 2018-07-05
114
Köp
Spara som favorit
Finns i lager! Skickas inom 1-2 vardagar.
Gratis frakt inom Sverige över 159 kr för privatpersoner.
Finns även som
Visa alla 3 format & utgåvor
'This is the most important conversation of our time, and Tegmark's thought-provoking book will help you join it' Stephen Hawking THE INTERNATIONAL BESTSELLER. DAILY TELEGRAPH AND THE TIMES BOOKS OF THE YEAR SELECTED AS ONE OF BARACK OBAMA'S FAVOURITE BOOKS OF 2018 AI is the future - but what will that future look like? Will superhuman intelligence be our slave, or become our god? Taking us to the heart of the latest thinking about AI, Max Tegmark, the MIT professor whose work has helped mainstream research on how to keep AI beneficial, separates myths from reality, utopias from dystopias, to explore the next phase of our existence. How can we grow our prosperity through automation, without leaving people lacking income or purpose? How can we ensure that future AI systems do what we want without crashing, malfunctioning or getting hacked? Should we fear an arms race in lethal autonomous weapons? Will AI help life flourish as never before, or will machines eventually outsmart us at all tasks, and even, perhaps, replace us altogether? 'This is a rich and visionary book and everyone should read it' The Times
Visa hela texten

Explores one of the most intriguing scientific frontiers, artificial general intelligence, and how humans can grow along with it. ... most will find the narrative irresistible. * Kirkus Reviews * 'I view this conversation about the future of AI as the most important one of our time,' he writes. Life 3.0 might convince even those who believe that AI is overhyped to join in. -- Clive Cookson * Financial Times * Tegmark's smart, freewheeling discussion leads to fascinating speculations on AI-based civilizations spanning galaxies and eons-and knotty questions: Will our digital overlords be conscious? Will they coddle us with abudance and virtual-reality idylls or exterminate us with bumblebee-size attack robots? While digerati may be enthralled by the idea of superintelligent civilizations where "beautiful theorems" servce as the main economic resource, Tegmark's future will strike many as a one in which, at best, humans are dependent on AI-powered technology and, at worst, are extinct... Love it or hate it, it's an engrossing forecast. * Publishers Weekly * It should be among the most important items on our political agenda. Unfortunately, AI has so far hardly registered on our political radar ... Max Tegmark's Life 3.0 tries to rectify the situation. Written in an accessible and engaging style, and aimed at the general public, the book offers a political and philosophical map of the promises and perils of the AI revolution. Instead of pushing any one agenda or prediction, Tegmark seeks to cover as much ground as possible, reviewing a wide variety of scenarios concerning the impact of AI on the job market, warfare and political systems. Life 3.0 does a good job of clarifying basic terms and key debates, and in dispelling common myths. -- Yuval Noah Harari * The Guardian * Lucid and engaging [...] Tegmark's explanation of how electronic circuitry - or a human brain - could produce something as evanescent and immaterial as thought is both elegant and enlightening. -- Frank Rose * Wall Street Journal * Fascinating ... for sheer science fun, it's hard to beat -- Stuart Russell * Nature * Stands out ... Tegmark explains brilliantly many concepts in fields from computing to cosmology, writes with intellectual modesty and subtlety, does the reader the important service of defining his terms clearly, and rightly pays homage to the creative minds of science-fiction writers who were, of course, addressing these kinds of questions more than half a century ago. It's often very funny, too. -- Steven Poole * The Telegraph * Tegmark successfully gives clarity to the many faces of AI, creating a highly readable book [...] Enjoy the ride, and you will come out the other end with a greater appreciation of where people might take technology and themselves in the years ahead. * Science * This is an exhilarating book that will change the way we think about AI, intelligence, and the future of humanity. -- Bart Selman, Professor of Computer Science, Cornell University Max's new book is a deeply thoughtful guide to the most important conversation of our time, about how to create a benevolent future civilization as we merge our biological thinking with an even greater intelligence of our own creation. -- Ray Kurzweil, Inventor, Author and Futurist, author of The Singularity is Near and How to Create a Mind The unprecedented power unleashed by artificial intelligence means the next decade could be humanity's best - or worst. Max has written the most insightful and just plain fun exploration of AI's implications that I've ever read. If you haven't been exposed to Max's joyful mind yet, you're in for a huge treat. -- Prof. Erik Brynjolfsson, Director of the MIT Initiative on the Digital Economy and co-author of "The Second Machine Age" Max seeks to facilitate a much wider conversation about what kind of future we, as a species, would want to create. Though the topics he covers - AI, cosmology, values, even the nature of conscious experi

Max Tegmark is a professor of physics at MIT and president of the Future of Life Institute. He is the author of Our Mathematical Universe, and he has featured in dozens of science documentaries. His passion for ideas, adventure, and an inspiring future is infectious.