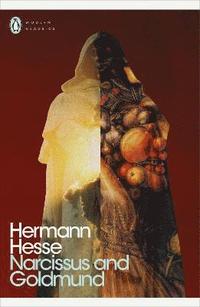 av Hermann Hesse
(1 röst)
Häftad Engelska, 2017-04-06
112
Köp
Spara som favorit
Finns även som
Visa alla 2 format & utgåvor
'One of his masterpieces . . . without doubt a great novel' Guardian One of Hermann Hesse's greatest novels, Narcissus and Goldmund is an extraordinary recreation of the Middle Ages, contrasting the careers of two friends, one of whom shuns life in a monastery and goes on the road, tangled in the extremes of life in a world dominated by sin, plague and war, the other staying in the monastery and struggling, with equal difficulty, to lead a life of spiritual denial. An superb feat of imagination, Narcissus and Goldmund can only be compared to such films set in medieval Europe as Bergman's The Seventh Seal and Tarkovsky's Andrei Rublev. It is a gripping, profound reading experience - as startling, in its different way, as Hesse's Siddhartha and Steppenwolf.
Visa hela texten

One of his masterpieces . . . without doubt a great novel * Observer * At the medieval monastery of Mariabronn, the restless Goldmund realises he isn't cut out for a cloistered life under the tutelage of his friend and mentor, the ascetic Narziss, and so begins a series of travels that see him work his way through most of the seven deadly sins before finding a psychic resolution of sorts in an apprenticeship to a master sculptor. Only by feeding his appetite for worldly experience does Goldmund finally find the courage to face death. * The Guardian 1000 Novels Everyone Must Read *

Hermann Hesse was born in Calw, Germany, in 1877. After a short period at a seminary he moved to Switzerland to work as a bookseller. During the First World War he worked for the Red Cross. His later novels - most importantly Siddhartha (1922), Steppenwolf (1927), Narcissus und Goldmund (1930) and The Glass Bead Game (1943) - and his poems and critical essays established him as one of the towering literary figures of the German-speaking world. He won many literary awards including the Nobel Prize for Literature in 1946. Hermann Hesse died in 1962.