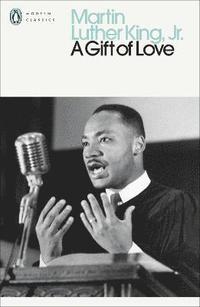 A Gift of Love

Sermons from Strength to Love

av Martin Luther King Jr
Häftad Engelska, 2017-01-05
139
Köp
Spara som favorit
Finns även som
Visa alla 2 format & utgåvor
'[He] inspired a generation ... He changed the course of history' Barack Obama As Martin Luther King, Jr. prepared for the Birmingham campaign in early 1963, he drafted the final sermons for Strength to Love, a volume of his best-known lectures. King had begun working on the sermons during a fortnight in jail in July 1962 and A Gift of Love includes these classic sermons, along with two new lectures. Drawing inspiration from both his Christian faith and the non-violent philosophy of Mahatma Gandhi, A Gift of Love illustrates King's vision of love and peaceful action as social and political forces for change.
Visa hela texten

A champion for justice, the Reverend Dr. Martin Luther King, Jr., helped awaken our Nation's long-slumbering conscience and inspired a generation ... He changed the course of history -- Barack Obama Martin Luther King's early words return to us today with enormous power, as profoundly true, as wise and inspiring, now as when he wrote them -- Howard Zinn

Born in 1929 in Atlanta, Georgia, Martin Luther King, Jr. was one of the most prominent leaders of the Civil Rights Movement. Widely regarded as one of the greatest activists in history, he became the youngest person to be awarded the Nobel Peace Prize, aged 35. King was assassinated on April 4, 1968, in Memphis, Tennessee.