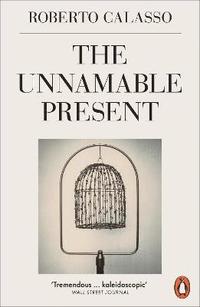 av Roberto Calasso
Häftad Engelska, 2020-04-23
117
Köp
Spara som favorit
Finns även som
Visa alla 2 format & utgåvor
Tourists, terrorists, secularists, hackers, fundamentalists, transhumanists, algorithmicians: in this book Roberto Calasso considers the tribes that inhabit and inform the world today. A world that feels more elusive than ever before. This book, the ninth part of a work in progress, is a meditation on the obscure and ubiquitous process of transformation happening in societies today, where distant echoes of Auden's The Age of Anxiety give way to something altogether more unsettling.
Visa hela texten

Surprising, illuminating . . . one of the many pleasures of reading Calasso is to follow the bumper-car ride of his thinking, as he caroms off this and that totemic figure dotted about the intellectual fairground * The New York Times Review of Books * The ninth in Mr. Calasso's kaleidoscopic series of investigations into the spiritual biography of the secular West . . . the two long essays in The Unnamable Present examine the effects of novel and often dangerous mythologies-democracy, nationalism, Darwinism, race theory- in 20th-century Europe . . . he handles the events of the past with the reverence of a priest, rather than the dispassion of a historian. Material facts are the tangible aspect of hidden truths -- Dominic Green * The Wall Street Journal * A public intellectual in the great European tradition, whose new book attempts to define the era we're currently living through * Irish Times * I love Roberto Calasso's writing: it's rigorous, elusive, and expansive. The Unnamable Present continues his austere, zigzagging history of the world, but the difference is that now he's examining the supermodern - and this shift would I guess be a moment for pure celebration, were his conclusions not so inescapable and so terrifying Calasso's erudition is dazzling . . . his assertions come in short, verbless sentences, darting from historical moment to historical moment, alighting on a person, a place, a topic, before moving briskly on * Times Literary Supplement * This slim but wide-ranging philosophical inquiry extends the Italian author's series on the roots of modernity, with particular attention to moral relativism * The New York Times *

Roberto Calasso was born in Florence in 1941. An author and publisher, he began working at Adelphi Edizioni from its founding in 1962 and continued as director for fifty years. The Book of All Books is the tenth part of a series that began with The Ruin of Kasch and includes the international bestseller The Marriage of Cadmus and Harmony as well as Ka, K., Tiepolo Pink, La Folie Baudelaire, Ardor, The Celestial Hunter and The Unnamable Present. He died in Milan in 2021.