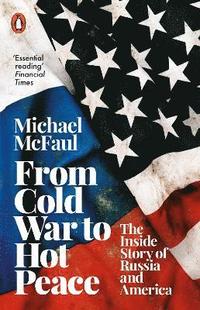 From Cold War to Hot Peace

The Inside Story of Russia and America

av Michael McFaul
Häftad Engelska, 2019-05-02
149
Köp
Spara som favorit
Skickas inom 5-8 vardagar.
Fri frakt inom Sverige över 159 kr för privatpersoner.
Finns även som
Visa alla 1 format & utgåvor
'A fascinating and timely account of the current crisis in the relationship between Russia and the United States' Daniel Beer, The New York Times 'Could not be more timely ... crucial reading for anyone interested in what's happening inside Putin's head' Oliver Bullough, Prospect A revelatory, behind-the-scenes account of Russian-American relations, from a former US ambassador and 'Obama's top White House advisor on Russia policy' (The New York Times) In 2008, when Michael McFaul was asked to leave his perch at Stanford and join President-elect Barack Obama's national security team, he had no idea that he would find himself at the beating heart of one of today's most contentious international relationships. McFaul had been studying and visiting Russia for decades, becoming one of America's preeminent scholars on the country during the first Putin era. During President Obama's first term, McFaul helped craft the policy known as "Reset," which fostered unprecedented collaboration between the two countries under Dmitry Medvedev's presidency. Later, as U.S. ambassador from 2012 to 2014, he witnessed firsthand how Vladimir Putin's new rise interrupted this era of cooperation and returned Russian-American relations to a level of hostility not known since the darkest days of the Cold War. From the outset of his ambassadorship, the Kremlin accused McFaul of being sent by Obama to foment revolution against Putin's regime. This resulting insider's account - uniquely combining history, politics and intimate personal knowledge of the corridors of power - takes us from Putin's dacha to ornate Kremlin chambers and the Oval Office, to explain how Russia really works, and why the world has entered a dangerous new era of confrontation.
Visa hela texten

An engaging, well-penned account of McFaul's days in Moscow * MacLeans * In From Cold War to Hot Peace: An American Ambassador in Putin's Russia, Michael McFaul examines how U.S.-Russia relations have evolved since 1989. He draws on history as well as the unique perspective he gained while serving as an ambassador. Given what's going on in the world, this book couldn't be more timely * Bustle * Of interest to observers of the unfolding constitutional crisis as well as of Russia's place in the international order * Kirkus * McFaul provides useful insights into the changing relationship between America and Russia in this smart, personable mix of memoir and political analysis... an essential volume for those trying to understand one of the U.S.'s most significant current rivals * Publisher's Weekly * An invaluable memoir -- David Remnick Vigorously argued...McFaul's contribution to the debate is significant, based on his experience as a political practitioner as well as an academic analyst * Washington Post * McFaul sheds needed light on the most geopolitically competitive relationship of the last 75 years * Guardian * McFaul's lively memoir is an up-close account of how Washington tried to find common ground with a Kremlin crippled by suspicion... McFaul comes at Putin from a special corner: as a boyish enthusiast for engagement with Russia. [...] As a young academic he was hungry to know about how the Soviet Union was going to break up. As an evangelist for democratic change he made contact with dissidents. And then, as special assistant to the president and ambassador, he was behind Barack Obama's 'reset' of relations with Russia * The Times * Impressive... a candid expert account ... McFaul is a senior policymaker both hugely knowledgeable about and admiring of Russia ... Essential reading * Financial Times * Michael McFaul left his posting as the US ambassador in Moscow in February 2014, as the Russian annexation of the Crimea inaugurated the worst crisis in the East-West relations in generation. In this thoughtful and clearly written account McFaul, one of the architects of President Obama's "reset" policy vis-a-vis Moscow, provides a unique insight in the chain of events that ended the new 'detente" and put the two nuclear superpowers on the brink of a new Cold War. This is a must read for everyone who wants to understand contemporary Russia and the dangerous world we live in today. -- Serhii Plokhy, Harvard University, author of Chernobyl: History of a Tragedy Careful about providing evidence for his hard-earned opinions, the Stanford professor is always clear and successfully assesses the level of complexity we lay-readers need to understand academic theories about revolutions and economics... Persuasive and convincing * Christian Science Monitor * This is an indispensable book. McFaul is a candid and insightful guide to the history, personalities, and politics that continue to shape one of America's most consequential relationships -- Hillary Rodham Clinton, former Secretary of State under Barack Obama (2009-2013) Mike McFaul has lived history. In this terrific book, he recounts a pivotal time in U.S.-Russian relations, bringing the perspective of a central participant and one of America's finest scholars of Russian politics. This book will be valued by students, experts, historians and diplomats for years to come -- Condoleezza Rice, former Secretary of State under George W. Bush (2005-2009) As both a first-hand observer and a key participant in many of the recent events that have shaped US-Russia relations, Ambassador McFaul has an important story to tell. From Cold War to Hot Peace is a gripping and intensely personal account of one of the most complex and consequential geopolitical developments of our time. -- Madeleine Albright, former Secretary of State under Bill Clinton (1997-2001) Mike McFaul gives us a broad, thoughtful analysis of a critical shift in world affairs. Read From Cold War to Hot Pea

MICHAEL MCFAUL is professor of political science, director and senior fellow at the Freeman Spogli Institute for International Studies at Stanford University, and a senior fellow at the Hoover Institution. He served for five years in the Obama administration, first at the White House as special assistant to the president and senior director for Russian and Eurasian affairs at the National Security Council, then as U.S. ambassador to the Russian Federation. Also an analyst for NBC News and a contributing columnist to the Washington Post, he is the author of several books, including Russia's Unfinished Revolution: Political Change from Gorbachev to Putin. McFaul was born and raised in Montana. He received his B.A. in international relations and Slavic languages and his M.A. in Soviet and East European studies from Stanford University, then completed his D. Phil. in international relations at Oxford University as a Rhodes Scholar.