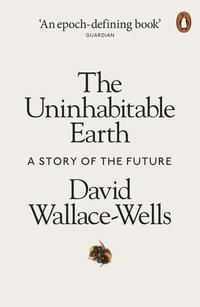 A Story of the Future

av David Wallace-Wells
(1 röst)
Häftad Engelska, 2019-09-05
109
Köp
Spara som favorit
Finns även som
Visa alla 2 format & utgåvor
**SUNDAY TIMES AND THE NEW YORK TIMES BESTSELLER** 'An epoch-defining book' Matt Haig 'If you read just one work of non-fiction this year, it should probably be this' David Sexton, Evening Standard Selected as a Book of the Year 2019 by the Sunday Times, Spectator and New Statesman A Waterstones Paperback of the Year and shortlisted for the Foyles Book of the Year 2019 Longlisted for the PEN / E.O. Wilson Literary Science Writing Award It is worse, much worse, than you think. The slowness of climate change is a fairy tale, perhaps as pernicious as the one that says it isn't happening at all, and if your anxiety about it is dominated by fears of sea-level rise, you are barely scratching the surface of what terrors are possible, even within the lifetime of a teenager today. Over the past decades, the term "Anthropocene" has climbed into the popular imagination - a name given to the geologic era we live in now, one defined by human intervention in the life of the planet. But however sanguine you might be about the proposition that we have ravaged the natural world, which we surely have, it is another thing entirely to consider the possibility that we have only provoked it, engineering first in ignorance and then in denial a climate system that will now go to war with us for many centuries, perhaps until it destroys us. In the meantime, it will remake us, transforming every aspect of the way we live-the planet no longer nurturing a dream of abundance, but a living nightmare.
Visa hela texten

In crystalline prose, Wallace-Wells provides a devastating overview of where we are in terms of climate crisis and ecological destruction, and what the future will hold if we keep on going down the same path. Urgently readable, this is an epoch-defining book. -- Matt Haig, 'The Book that Changed My Mind' * The Guardian * 'Clear, engaging and often dazzling' * The Telegraph * 'A masterly analysis' * Nature * Relentless, angry journalism of the highest order. Read it and, for the lack of any more useful response, weep. . . .The article was a sensation and the book will be, too. -- Bryan Appleyard * The Sunday Times * The most terrifying book I have ever read . . . a meticulously documented, white-knuckled tour through the cascading catastrophes that will soon engulf our warming planet. * The New York Times * This is what I'm reading now: The Uninhabitable Earth by David Wallace-Wells. It focuses on the range of realistic possibilities with climate change. It does not sugarcoat, and can be quite scary -- that's without primarily focusing on the worstcase scenario. When people ask 'What can I do? - Read! What we need right now, in this country, is for all of us to be better, including ourselves. A must-read. It's not only the grandkids and the kids: it's you. And it's not only those in other countries: it's you. -- Margaret Atwood * Twitter * I've not stopped talking about The Uninhabitable Earth since I opened the first page. And I want every single person on this planet to read it. Riveting . . . Some readers will find Mr Wallace-Wells's outline of possible futures alarmist. He is indeed alarmed. You should be, too. * The Economist * Skipping the scientific jargon and relaying the facts in urgent and elegant prose, the magazine editor crafts a stirring wake-up call to recognize how global warming will permanently alter every aspect of human life. -- Best Nonfiction Books of 2019 So Far * Time * Wallace-Wells is an extremely adept storyteller, simultaneously urgent and humane . . . [he] does a terrifyingly good job of moving between the specific and the abstract. * Slate * Enough to induce an honest-to-God panic attack ... The margins of my review copy of the book are scrawled with expressions of terror and despair, declining in articulacy as the pages proceed, until it's all just cartoon sad faces and swear words ... To read The Uninhabitable Earth is to understand the collapse of the distinction between alarmism and plain realism -- Mark O'Connell * The Guardian * There is much to learn from this book. From media and scientific reports of the past decade, Wallace-Wells sifts key predictions and conveys them in vivid prose. -- David George Haskell * The Observer * Brilliant ... At the heart of Wallace-Wells's book is a remorseless, near-unbearable account of what we are doing to our planet * The New York Times * Not since Bill McKibben's "The End of Nature" 30 years ago have we been told what climate change will mean in such vivid terms. -- Fred Pearce * The Washington Post * Everyone should stop what they're doing and read The Uninhabitable Earth by @dwallacewells. This is our future if we don't act now. -- Johann Hari * Twitter * Wake up! Get educated - The Uninhabitable Earth by David Wallace Wells is a great place to start. -- Paris Lees * Vogue * A book that's by turns alarming, terrifying and just downright bleak . . . a sustained piece of informed polemic. * The Evening Standard * A very accessible and compelling read . . . a much more nuanced and a much more hopeful vision than you might expect. * The Irish Times * I think everyone should probably right now read David Wallace-Wells's The Uninhabitable Earth, which tells the grim story with as much optimism as possible, and which gives all the facts. -- Daniel Swift * The Spectator, Books of the Year * Well-written, captivating, occasionally wry and utterly petrifying * i News * In his gripping new book ... Wallace-Wells shocks us out of complacency' * Prospec

David Wallace-Wells is deputy editor of New York magazine, where he also writes frequently about climate change and the near future of science and technology. In July 2017 he published a cover story surveying the landscape of worst-case scenarios for global warming that became an immediate sensation, reaching millions of readers on its first day and, in less than a week, becoming the most-read story the magazine had ever published -and sparking an unprecedented debate, ongoing still today among scientists and journalists, about just how we should be thinking, and talking, about the planetary threat from climate change.