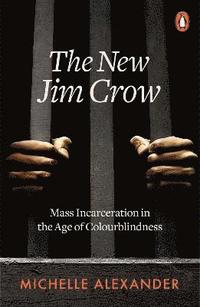 Mass Incarceration in the Age of Colourblindness

av Michelle Alexander
Häftad Engelska, 2019-06-06
108
Köp
Spara som favorit
Finns även som
Visa alla 2 format & utgåvor
The iconic New York Times bestseller that 'struck the spark that would eventually light the fire of Black Lives Matter' (Ibram X. Kendi) Named one of the most important nonfiction books of the 21st century by Entertainment Weekly' Slate' Chronicle of Higher Education' Literary Hub and Book Riot Once in a great while a book comes along that radically changes our understanding of a crucial political issue and helps to fuel a social movement. The New Jim Crow is such a book. Lawyer and activist Michelle Alexander offers a stunning account of the rebirth of a caste-like system in the United States, one that has resulted in millions of African Americans locked behind bars and then relegated to a permanent second-class status, denied the very rights supposedly won in the Civil Rights movement. Challenging the notion that the election of Barack Obama signalled a new era of colourblindness in the United States, The New Jim Crow reveals how racial discrimination was not ended but merely redesigned. By targeting black men through the War on Drugs and decimating communities of colour, the American criminal justice system functions as a contemporary system of racial control, relegating millions to a permanent second-class status even as it formally adheres to the principle of colourblindness. A searing call to action for everyone concerned with social justice, The New Jim Crow is one of the most important books about race in the 21st century.
Visa hela texten

One of the most influential books of the past twenty years * Chronicle of Higher Education * Struck the spark that would eventually light the fire of Black Lives Matter -- Ibram X. Kendi * New York Times * Devastating. . . Alexander does a fine job of truth-telling, pointing a finger where it rightly should be pointed: at all of us, liberal and conservative, white and black * Forbes * Transformed forever the way thinkers and activists view the phenomenon of mass incarceration * Slate * Undoubtedly the most important book published in this century about the U.S. * Birmingham News * Like many white people, I've tried to deepen my understanding of systemic racism. Alexander's book offers an eye-opening look into how the criminal justice system unfairly targets communities of color, and especially Black communities. It's especially good at explaining the history and the numbers behind mass incarceration -- Bill Gates It is in no small part thanks to Alexander's account that civil rights organizations such as Black Lives Matter have focused so much of their energy on the criminal justice system -- Adam Shatz * London Review of Books * Invaluable . . . a timely and stunning guide to the labyrinth of propaganda, discrimination, and racist policies masquerading under other names that comprises what we call justice in America * Daily Kos * Alexander deserves to be compared to Du Bois in her ability to distill and lay out as mighty human drama a complex argument and history * New York Review of Books *

Michelle Alexander is a civil rights lawyer and advocate, legal scholar and New York Times columnist. She has served as a professor at several universities, including Stanford Law School and is currently a visiting professor at Union Theological Seminary in New York. Prior to entering academia, she served as the director of the Racial Justice Project for the ACLU of Northern California, where she coordinated the media advocacy, grassroots organizing, coalition building, and litigation.