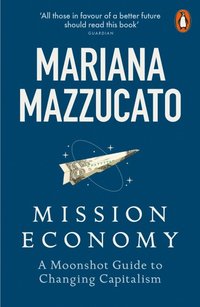 A Moonshot Guide to Changing Capitalism

av Mariana Mazzucato
Häftad Engelska, 2022-01-27
140
Köp
Spara som favorit
Finns även som
Visa alla 7 format & utgåvor
'One of the most influential economists in the world' Wired Even before the Covid-19 pandemic in 2020, capitalism was stuck. It had no answers to a host of problems, including disease, inequality, the digital divide and, perhaps most blatantly, the environmental crisis. Taking her inspiration from the 'moonshot' programmes which successfully co-ordinated public and private sectors on a massive scale, Mariana Mazzucato calls for the same level of boldness and experimentation to be applied to the biggest problems of our time. We must, she argues, rethink the capacities and role of government within the economy and society, and above all recover a sense of public purpose. Mission Economy, whose ideas are already being adopted around the world, offers a way out of our impasse to a more optimistic future.
Visa hela texten

The case for a new approach is overwhelming and Mariana Mazzucato's project is ambitious ... Mission Economy injects the kind of vision, ambition and imagination so desperately missing from government today ... All those in favour of a better future - of prosperity that is broadly shared, first class public services to be enjoyed by all, and a solution to the climate crisis - should read this book. -- Tom Kibasi * The Guardian * One of the most agile thinkers on post-Brexit, post-Covid Britain. -- Alex Brummer * Daily Mail * a wider and more radical critique of modern capitalism ... Mazzucato is a fantastic example of a charismatic policy entrepreneur having a real impact ... Mazzucato rightly shows that the state can rise to grand challenges and set ambitious missions. -- David Willetts * Research Professional News * a bracing, optimistic read -- David Miliband A timely and optimistic vision ... Mazzucato presents her arguments so simply and clearly that they can seem obvious. In fact, they are revolutionary. Rethinking the role of government nationally and in the international economy - to put public purpose first and solve the problems that matter to people - are now the central questions for humanity -- Jayati Ghosh * Nature * In Mission Economy Mariana Mazzucato argues that societies ought to abjure tired ideologies and embrace the policy approach that put astronauts on the Moon. By setting grand missions for themselves, she writes, and deploying the power of the state in practical ways, they can become more prosperous and equitable ... Mazzucato is an Italian-born economist of a heterodox bent, whose work has long challenged standard economic thinking about the role of markets and government in generating innovation ... compelling ... arresting * Economist * 'This book is by an influential thinker on an important topic at a time when trust in direction by governments has risen greatly relative to trust in decentralised competition within markets. Mazzucato recommends goal-oriented innovation as the way forward for the world.' -- Martin Wolf * Financial Times * Mission Economy proposes that we need to corral the state's energies into risky moonshots-just as JFK did with space travel. The mission then needs translating into a target whose achievement can be monitored. According to ex-Bank of England governor Mark Carney, the missing ingredient in economics is morality. * Prospect *

Mariana Mazzucato (PhD) is Professor in the Economics of Innovation and Public Value at University College London (UCL), where she is Founding Director of the UCL Institute for Innovation & Public Purpose (IIPP). She received her BA from Tufts University and her MA and PhD from the Graduate Faculty of the New School for Social Research. Her previous posts include the RM Phillips Professorial Chair at the Science Policy Research Unit (SPRU) at Sussex University. She is a selected fellow of the UK's Academy of Social Sciences (FAcSS) and of the Italian National Science Academy (Lincei). She is winner of international prizes including the Grande Ufficiale Ordine al Merito della Repubblica Italiana in 2021, Italy's highest civilian honour, the 2020 John von Neumann Award, the 2019 All European Academies Madame de Stael Prize for Cultural Values, and the 2018 Leontief Prize for Advancing the Frontiers of Economic Thought. She was named as one of the '3 most important thinkers about innovation' by The New Republic, one of the 50 most creative people in business in 2020 by Fast Company, and one of the 25 leaders shaping the future of capitalism by WIRED. She is the author of three highly-acclaimed books: The Entrepreneurial State: debunking public vs. private sector myths (2013) which investigates the critical role the state plays in driving growth; The Value of Everything: making and taking in the global economy (2018) which looks at how value creation needs to be rewarded over value extraction; and the newly released Mission Economy: a moonshot guide to changing capitalism (2021).